Recognition still comes as a surprise to Coach Higgins 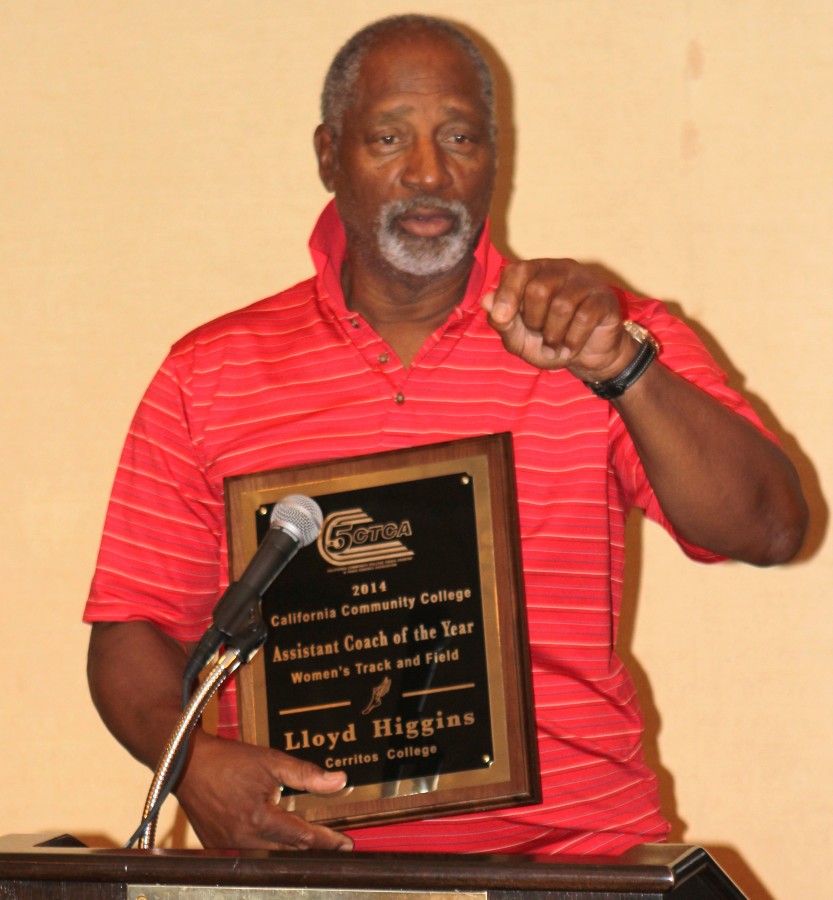 Inspiring athletes: Coach Lloyd Higgins was awarded his second assistant coach of the year award, the first dating back to 2009. This is his second award in five years.

One of Cerritos College’s very own, coach Lloyd Higgins, was awarded the 2014 California Community College Assistant Coach of the Year for women’s track and field.

This is not Higgins’ first time winning the award.

The award recognizes elite assistant coaches, and Higgins received it for the second time since his tenure at Cerritos College.

“It’s very surprising, both times I’ve received it. It’s nice to realize that your peers and other coaches from the state of California recognize the time and effort that you put in to vote for you. It’s an honor,” he said.

But who is the man behind this distinguished award?

He refers to himself as a local boy with a big family. Growing up with seven, it was at his high school, Manual Arts, where he became more than an ordinary boy from Los Angeles.

After his success at the high-jump at Manual Arts, his accomplishments grew at Point Loma Nazarene University, formally known as Pasadena College, where he ranked within the top-15 high-jumpers in the world in 1968.
From there, he continued to train and tried-out for the Olympic trials twice in his athletic career.

During his time at Point Loma, he found a future calling for others.
“Once I could no longer high-jump at a national level, I wanted to throw and train in throwing; learning more about throwing and trying to find ways to improve on (the) technique.”

Higgins was then given a coaching opportunity at Citrus Community College while teaching physical education at Monrovia High School. He coached in a variety of events, such as training decathletes and high-jumpers, all the way to his forte, throwing.

“You’ve come into college and you learn to throw well because it’s something totally new and refreshing. You can find immediate success because you’ve never done it before,” he said.

Higgins’ pursuit of knowledge and ability to mold accomplished throwers can be considered quite admirable.

“I would go to clinics and learn from the best in the world. I learned from athletes who were training for Olympic trials to former American record holders in throwing.”

After retiring from teaching, he moved on to Cerritos College in 2008. At the California Community College Athletic Association State Championships, he helped Cerritos track and field win first place four times, second place three times and third place twice in the past nine seasons.

So what is his mindset that inspires athletes and has California calling him a leading expert in throwing?

“I have to improve as a coach on a daily basis. I sit at home and I constantly think of ways to help my athletes improve and think of things that will help our program be successful,” he said.

Higgins also emphasizes the importance of being involved within the program. After showing his invention to help hammer throwers improve, he said, “It’s just a matter of being involved or not. I’m a retired person that looks forward to coming out here because I have such good kids. I’ll do anything for them.”

Networking with the team is another part of Higgins’ philosophy.

Shot-put thrower, Matthew Seawright, said, “The way he operates things is solid. He doesn’t let anyone fall through the cracks.”

Seawright was a football player for the Cerritos Falcons and a runner for track and field until he pulled a hamstring last December. Higgins persuaded him to become a thrower, where he found great success.

“He turned me from nothing to state qualifier and national junior qualifier. ‘Assistant Coach of the Year’ is appropriate,” Seawright said.

Carissa English, hammer thrower from Cal Poly Pomona and former state champion qualifier for Cerritos College, said, “(Higgins) deserves it because he pushes you to be the best that you can be. It can be frustrating at times, but whatever he’s trying to do will better you in every way.”

Higgins hopes to continue to build on Cerritos’ success and improve his athletes.

“I come here everyday with an idea of what I’m going to do to help them (the athletes). It keeps my mind fresh. This is my fountain of youth, being out here with these guys.”