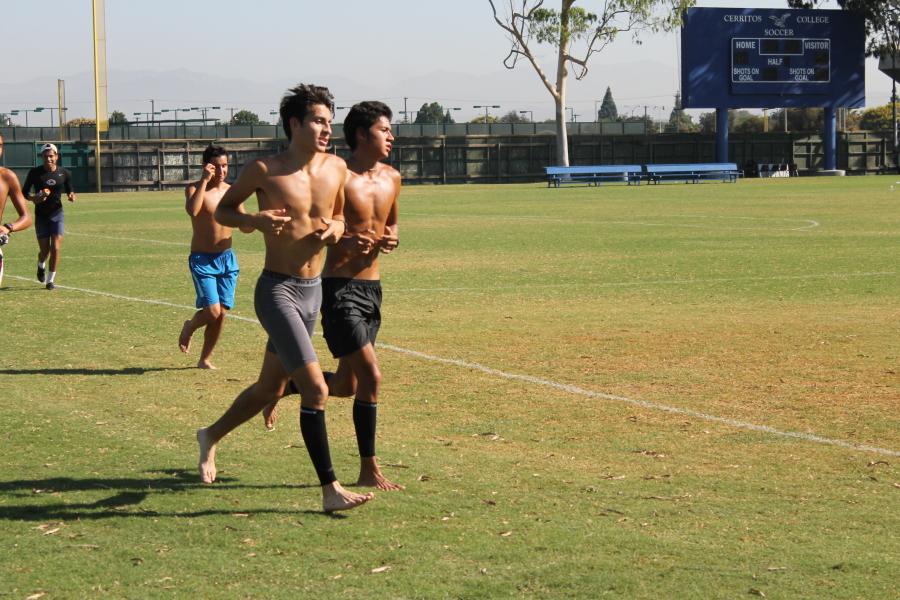 The men's cross country team are running as a pack during practice.

Top-conference placing is absolutely the goal for both men and women’s cross country teams.

Anthony Lozano, the men’s cross country team captain, said, “This year, I’m mainly focusing on trying to win our conference and (get better) as a team (than) last year; we finished fourth in state, so this year, we are working to improve that.”

The women are going for the same goal, as well.

“The (women) are looking pretty good, so I wouldn’t be surprised if we can win. But as long as we’re all working together, I’m pretty sure we can place pretty high up,” she said.

“Our first goal is conference and our main competitors are (Mt. San Antonio), from there, qualify (for) regionals and do well there,” he said.

The men and women both had a meet on Sept. 6 at Woodwark Park.

The women’s star performer was Ariel Mendez, coming in eighth out of 127 runners and finished at a time of 19:11.33.

The standards have been set high.

Coach Ramos said, “For the women, definitely, top three in regionals and going into state top three for them; that’s our goal,. And for the men, we want to do the same.”

The team has already competed in two meets, so far.

The men and women’s cross country teams next meet is Saturday at Woodley Park in Van Nuys for the Southern California Preview meet.