‘It takes more than just being a woman’ 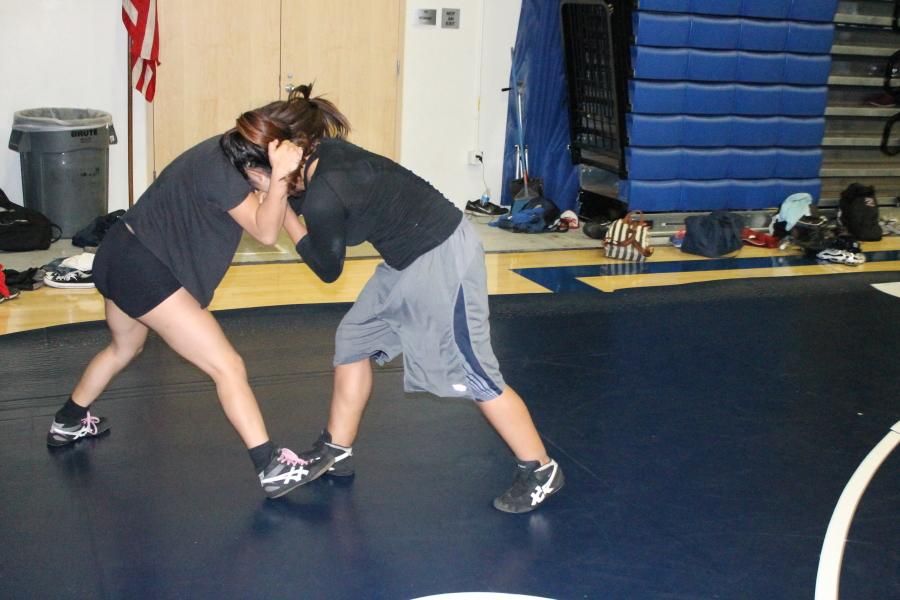 Two souls: Adriana Alcaraz and Jennifer Anaya are two female athletes that are part of the wrestling team. “They work hard enough; they should be there,” Jesse Mastron said.

The Cerritos College wrestling team has two women on the team who have the same amount of passion in wrestling as the men do.

“I believe I make an impact because I’m there all the time and I put so much of my time on the team because it’s my passion and it’s something that I look forward to doing, ” Adriana Alcaraz said, who is one of the female wrestlers.

Alcaraz first started wrestling at Downey High School. This is where it started for her, not just because of her literally starting there, but because of the weight-cutting.

She said that when wrestlers start losing weight to make a weight class, they can officially be known as a wrestler.

“Once you cut weight, you’re a wrestler, and when I wrestled in high school, I had to cut weight,” she stated.

When wrestling comes to mind, it’s typically men that participate. In this case, there are two women who are participating instead.

But it goes beyond just gender.

“It feels pretty good because it gives us an opportunity to show people what we can give, instead of just being a (woman) or a (woman) wrestler.

“It takes more than a (woman) on the team, you have to put so much effort, concentration and you have to be confident, committed.

“It takes more than just being a (woman). You have to be there and have your mind set already, and it feels good once you go through the stages,” Alcaraz said.

Jennifer Anaya is also another female athlete on the wrestling team.

“It feels great being the only other (woman) because it’s a hard sport, even for guys,” she said.”No other (woman) would be able to do this. It’s really hard.”

This is Anaya’s first year of wrestling and she will be starting off as a red-shirt athlete.

“This is my first year of wrestling, but (it’s) my red-shirt year. Next year, I need to wrestle harder so that next year I can wrestle. I’m getting better and I feel like it’s a passion for me and I really like it,” she said.

Female wrestlers may have a preference in wrestling just women, but Anaya had something different to say.

Head coach Don Garriott sees nothing wrong with both athletes.

“As long as they show up and they’re working hard, then I wouldn’t have an issue with it. We don’t have a (women’s) team, so they’re basically training and learning the sport. They’re both new to it,” he said.

One of the male wrestlers was impressed with the hard work the women have put in.

“They work hard enough; they should be there,” Jesse Mastron said.

A straight-sweep is what the wrestling team accomplished in its season-opener at the Mt. San Antonio Duals.

Its next meet is against Santa Rosa at 6 p.m. at West Hills Lemore.