Another loss in a close game for women’s water polo 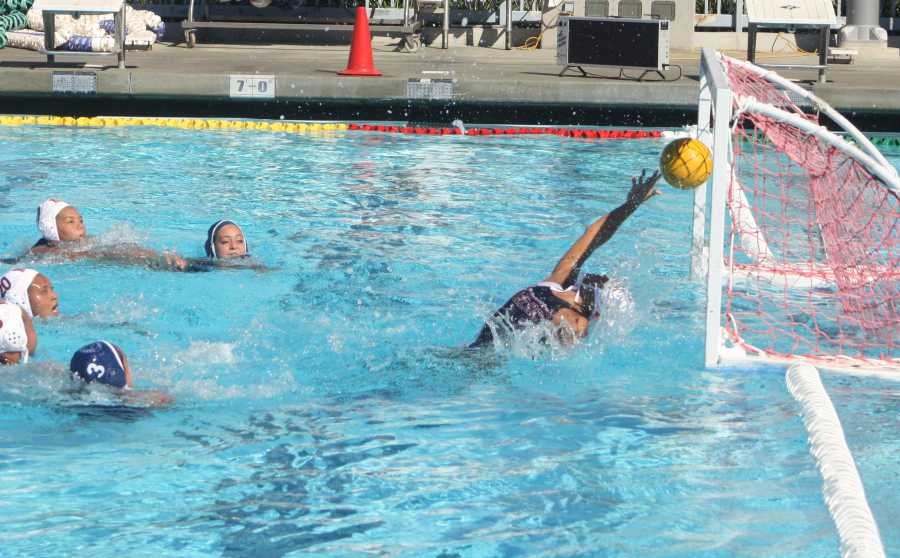 “I think throughout the entire game, we were in it, whether we were down by one or down by four, it was definitely a winnable game,” assistant coach Sharon Ku said after suffering another loss.

The women’s water polo team played a tough game against Mt. San Antonio College, only to lose with a score of 13-10.

The first period ended close, with sophomore Celeste Ibarra, who was also the leading score holder of the game, scoring a goal that left both teams at four points.

“It was great that our role players stepped up … we had No. 5, Celeste, go four for nine in goals,” Ku said.

The women’s team fought hard, only to be blown out by several consecutive goals from Mt. San Antonio.

The fourth period started off at a score of 12-7, in Mt. San Antonio’s favor.

Mt. San Antonio College won the sprint for the fourth time in a row and gained more advantage, once captain of the Falcons, Carla Harvey, was kicked out for the third time, resulting in an ejection from the game.

“Unfortunately, I wasn’t keeping track of my kick-outs, and I was majored from the game; but I’m glad that even though I came out, my team stepped up. (They) did amazing,” Harvey said.

The Falcons’ defense was low, which resulted in Mt. San Antonio College earning three five-meter shots, but even then the team didn’t give up.

Freshman Samantha Cruz stepped up her game with two goals, steals and some assists.

“My captain got majored and it set us back a little, but I had to step up. I think we did pretty well,” Cruz said. ” I like (this team) a lot, there’s a lot of good energy and we work together a lot.”

After fighting hard in the last quarter, the team lost with an ending score of 13-10, but this was not the end for the women.

Once the match was over, the team began to swim a 500-yard set of butterfly strokes.

Captain Carla Cruz said, “Our rule is, if you get majored – which is three kick-outs and you aren’t aloud back in the game – you have to do a 500-fly; and, unfortunately, I had to do it, and so did my teammate Amanda.

But because we are a team, my team said (it) would do it with me. We’re a team. We don’t do stuff alone.”

The men’s water polo team played the game after the women against Mt. San Antonio College, as well, earning an 8-7 victory.