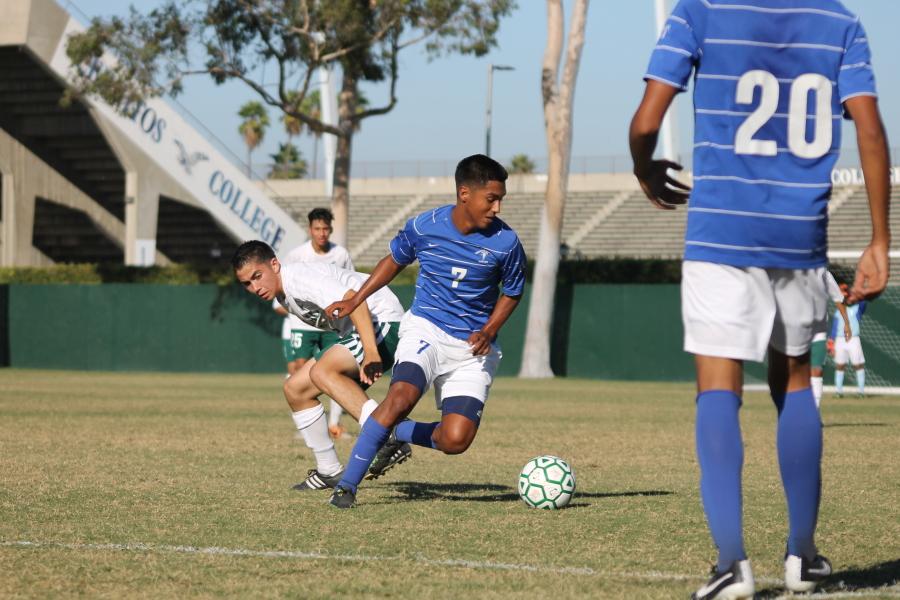 The Cerritos College men’s soccer team pulled through a stubborn East Los Angeles College defense to give it a 2-1 win in the team’s first home conference game on Tuesday, Sept. 30.

Possession of the ball was quickly conquered by the Falcons as the high tempo the team established rocked the sturdy stance ELAC was thought to have shown.

Quick connecting play between midfielders and forwards brought about the bombardment of the opponent’s net, as the Falcons riddled the goal with several shots in the first half.

Cerritos struck first as the goal came in the 34 minute of the second half. Forward Christian Carrillo was quick to pick up a cleared ball as he rifled the spherical past the keeper with an outside the 18-yard box.

“We are a team that likes to keep the ball and tire out the opposition,” Carrillo said.

The only time East Los Angeles posed a threat to the confident Cerritos side was after a magisterial goal ELAC scored on the Falcons, putting the team back at level with 1-1.

The goal came from a set piece 40 yards away from Cerritos’ goal line. Soon after the kick taker powered to take the free kick, the ball took momentum and curved in slightly past the keeper.

The final 25 minutes of the game proved to be a deadlock as Cerritos attempted to find a break in the defensive efforts of ELAC but of no prevail.

Quick one-two passing was orchestrated by the Falcons’ midfield to get their fellow forwards into striking position, but ELAC stood its ground, parrying every attempt on goal.

Just minutes before the final whistle was blown, a quick Cerritos counter attack flooded the goal mouth of ELAC and, in a defensive effort a player for the Cerritos side, was heavily tackled in the penalty box.

The referee pointed to the white dot in the box and called a penalty kick in favor to the Falcons.

Midfielder Mario Guerrero approached the ball and slotted it into the low right-hand corner of the net, past an infuriated ELAC goalkeeper.

ELAC’s final advancements into Cerritos’ territories proved unfruitful as the game ended with a score of 2-1 in favor of Cerritos College.

Head coach Benny Artiaga was pleased with the determination of the players on the pitch, but was concerned with unnecessary fouls his team committed.

“Then we committed that silly set piece,” Artiaga said. “And a goal like that gives a team [ELAC] life.

“It would have been a travesty if we tied the game.”

Center-back Ludwig Vargas knows that the turf field at East Los Angeles will play a big role the next time the two teams face each other Oct. 25.

“Their field is half our size,” Vargas said. “We have to practice playing in tighter spaces.”

The next conference game will be Oct. 3 at Long Beach City College at 4 p.m.