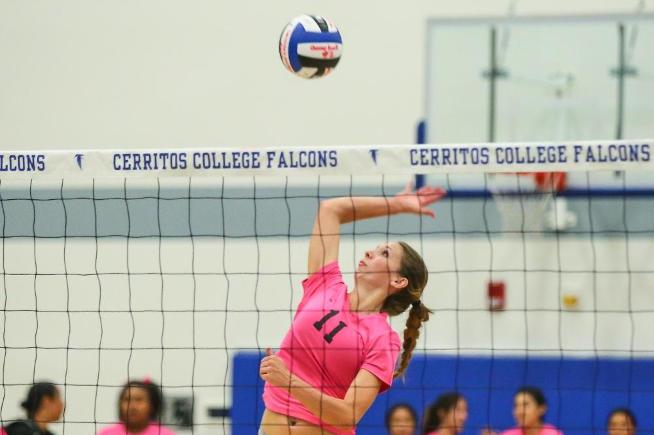 A straight 3-0 sweep secured a victory for the volleyball team against Pasadena City College at home Wednesday, Oct. 8.

This is the first time Cerritos notched a victory against Pasadena since the 2006 season, per Cerritos Falcons.

The Cerritos College volleyball team now has a 4-6 record.

Lisa Villarroel, middle blocker, said, “Individually, everyone needs to focus on (their) position and do what (you’re) supposed to do and that is what makes us a team.”

Even though the Falcons won every set, Peralta feels they could have done better.

“No, we did not dominate. We could have dominated, but we didn’t.”

Libero, Jasmine Peralta thinks that the things the team needed to do was to communicate better as a team and tell each other how to make the corrections during the game.

In the second set, it looked like there was a moment of resurgence for the opposition, as it started to take the lead early, but the Falcons eventually turned it up and took the lead.

“I think we should have done a little better. We just made a lot of little mistakes and we have to be ready for Friday. This time, it’s going to be a tough game against (Mt. San Antonio College),” head coach Teresa Velasquez-Ortega said.

Coach Velasquez-Ortega feels that for some reason when the team switches sides, it ends up making small mistakes in the beginning but ends up calibrating.

As far as key players in the game, coach Ortega thinks, Jasmynne Roberts, outside hitter, had an exceptional game as she got 15 kills.

Pasadena mulled over its loss.

Coach Sanchez feels that when things go well we tend to do pretty well and when things fall apart it takes them a long time to regroup.

“At the beginning of each game, we had a lot of energy and then we kind of gave up, I guess. I don’t really know, but (it is) just little errors,” Pasadena City College right-side hitter Michelle Boy said.

Cerritos will now be preparing to go against Mt. San Antonio College at home Friday, Oct. 10, at 6 p.m.