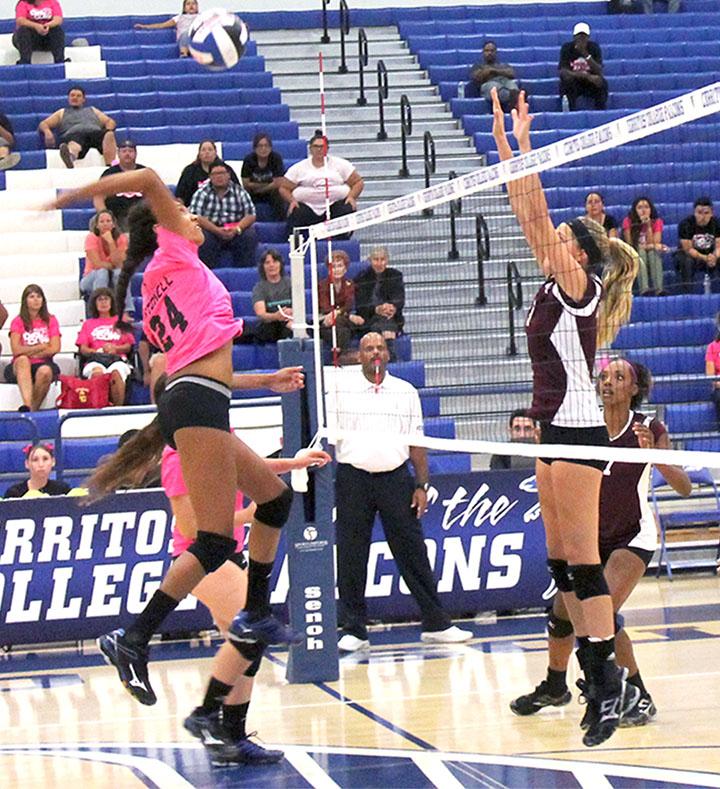 Middle Blocker Jasmin Mitchell going in to spike the ball. The Falcons would go to defeat the Mounties for the first time in five years.

A positive mindset is what led to the volleyball team’s 3-1 victory against Mt. San Antonio College on Friday, Oct. 10.

Cerritos won the first set, 25-17, but the Mounties had the upper hand in the second set, taking the lead and winning it 17-25.

Sara Hickman, outside hitter, said, “In the second game, we had some miscommunication and that [caused] a couple errors.”

Despite being tied 15-15 with both teams going back and forth in the third set, Cerritos made the adjustment and took control, winning the set 25-19.

Setter Michelle Barba had a season-high 32 assists and said that the team’s adjustment was to stay calm and go one point at a time.

In the last set, the Falcons had an overwhelming lead of 14-2 and eventually sealed the victory at 25-11.

“We start worrying about our mistakes instead of focusing on playing as a team,” Mt. SAC libero Chole Clancy said about the last set. “We just shut down and didn’t play our game at all.”

Reflecting on the team’s performance, Barba said, “This is the first match where we had shown each other that we can come together and fight.”

The Falcons’ next game will be away at East Los Angeles on Wednesday, Oct. 15, at 6 p.m.