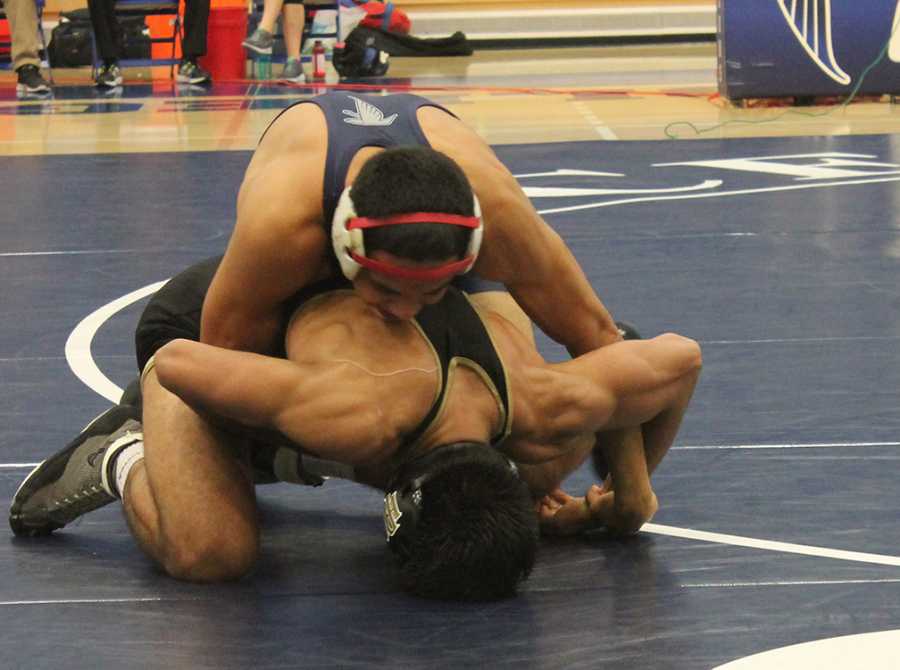 Eric Ambriz, a nursing major, has a grip on his opponent.

The men’s wrestling team wins an important conference game and will be heading to the Southern Regional Duals with a winning streak of seven meets.

There were about 50 people in attendance to see the wrestling team get its home win over Rio Hondo College on Wednesday, Oct. 15. The final score of the match was 38-9.

The men were very happy about the large margin victory.

“I was excited; ready to go. I didn’t like the way I wrestled the first time I wrestled (Rio Hondo). I was excited to come out this week and dominate,” Robert Chism said.

There are many things that the men did in order for them to win with a big lead.

“I thought we wrestled really well on our feet. We outscored (Rio Hondo) on take-downs quite a bit,” head coach Don Garriott said about the strengths of this match.

But the men felt like there should be some improvements in their performance.

“We need to word on cardio; you can never improve your cardio enough, there is always enough in the tank. You just have to keep pushing it because you’re always going to get tired from pushing it. It’s (all) mental, as well,” Antonio McKee said as he explained possible improvements for the team.

The Falcons have a big tournament coming up this weekend. The Regional Duals are set to start Saturday.

“We have the Regional Duals this weekend here (at home), the winner goes to the state championship for the dual meets, and it’s a different mindset because we have two hours after weigh-ins and we have multiple duals and it seems like our team gets better as the day goes on and as the matches go on. So as long as we get warmed up for the first dual meet, we will be fine,” Garriott said.

The wrestling team has a perfect record this season and are refusing to lose any match.

The team hopes to continue its undefeated season on Saturday, Oct. 18, in the Southern Regional Duals at 9 a.m. at the Falcon Gymnasium.