Men’s tennis prepares for new season ahead of 2015 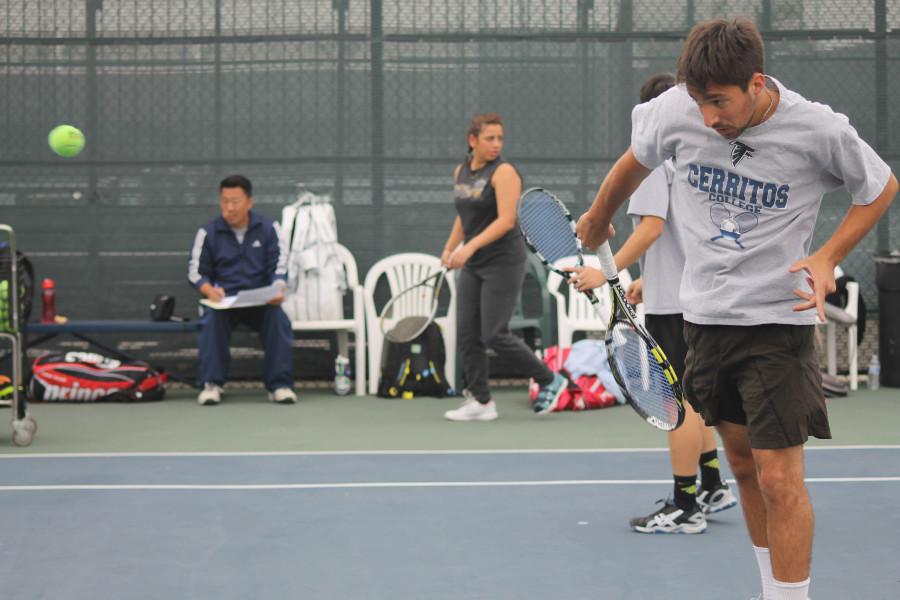 After finishing fourth in the CCCAA State Championships, the Cerritos College men’s tennis team are prepared to make another run at the state title, only this time without State JC Champion and South Coast Conference Athlete of the Year Nathan Eshmade.

The absence of Eshamde leaves a sizable void in what was a top-heavy roster. 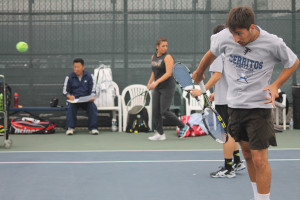 Sophomore Nicholas Simonelli, realizes that the exception of Eshmade will have an impact on the roster.

“We lost (Eshamde), it’s kind of going to hurt us because we would at least get one point in singles and doubles so we’ve lost that security but we do have a deeper team compared to last year,” said Simonelli. We’ve got a solid line-up rather than one really good (player).”

Although with an influx of new international players joining the team this year, the Falcons are well rounded with better overall depth.

Head coach Alvin Kim believes this creates a better team dynamic, giving them leeway to bond with one another as the team approaches the first match of the season against Mt. San Jacinto on Jan. 27.

“We have a lot more foreign players, so it’s an interesting dynamic. I think it’s more fun, the guys always have something to talk about, as much as people might think it creates chasms in the team, I think that it is more of a bonding affect,” said Kim.

The addition of international players adds different styles to the roster, it also gives players an opportunity to learn and compete against different tendencies.

With Eshmade gone, it has given Amadi Kagoma a chance at the top of the rotation for the men’s tennis team.

Kagoma was the number two last season and the transition from second to first is obvious for Kagoma.

“It means I have to step up, definitely. Last year I was a bit relaxed because I was number two, this year I’m playing number one, there’s a lot more competition. Being number one isn’t just a (title) you have to step up your game and that’s what I’m looking forward to,” said Kagoma.

Conditioning drills have also changed for the Falcons this season compared to last.

“The conditioning last year was pretty good but not quite as difficult as this year because this year coach wants better results.