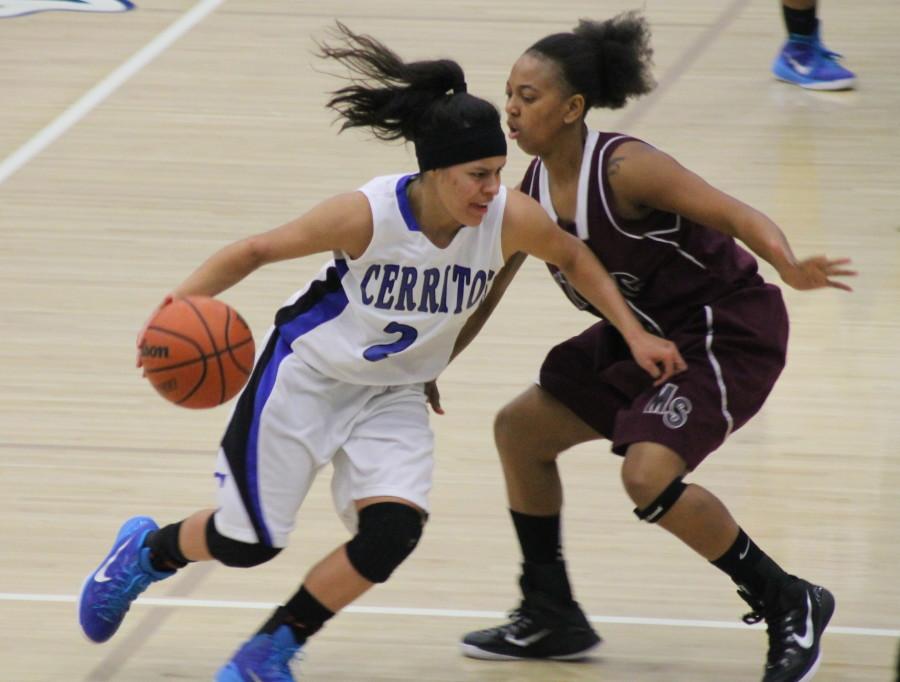 The Cerritos College women’s basketball team lost to the Mt. San Antonio Mounties during a home game with a final score of 64-49.

The next match is Jan. 28 at 7 p.m. which is an away game at Los Angeles Trade-Tech.

Things were looking up for the Falcons as they took the lead during the start of the game against the Mounties but then took a turn when Mt. San Antonio sideline benched players started to encourage their teammates through their rhythmic chants, changing the momentum of the game.

The Falcons were losing the lead with seven and the Mounties nine within first 10 minutes.

According to Baldwin, “I think it was the first half that led us because we hustled and played as a team. Second half our minds dropped and because of that I believe we need to improve on mental toughness.”

Baldwin disclosed that during the team huddle Head Coach Karen Welliver said there was no player to take charge out on the court and the Falcons need to play as a team in order to win.

First half ended quickly with Falcons losing the lead to Mt. Sac Mounties 36-24.

During the second half, the Falcons picked up the pace after Welliver delivered an intense speech during the timeout to tell girls to cut down on turnovers, work on transition lay ups, and get those rebound.

Falcons started to play very competitively and great defensively ending with Falcons scoring 25 and Mt. San Antonio 28, but not enough to get back in lead.

Guard Verenice Gomez, felt the team did well by not giving up and had great encouragement from Welliver to do better.

Gomez said, “I had faith in my team that we could make it a close game but after [Mt. San Antonio] started scoring more we lost momentum and did not come through.”

Although, there was some arguing from teammates throughout the game, Gomez knew it was just from frustration and the nerves kicked in because of the long anticipated match against Mt. San Antonio.

Gomez expressed how proud she was of her team because she knows they go very hard during practice and she looks forward to the next match in order to apply what they learned during this game.

Going into this game Welliver felt confident knowing they have been played some tough competition throughout the year and felt very prepared. She knew Mt. San Antonio was a tough competitor as they are ranked one of the top 5 teams in the state and have very strong rebounders.

Welliver said, “We need to make our shots. We had good shots and we didn’t convert. We have to cut down our turnovers because we gave them some fast break layups so they get some easy shots.”