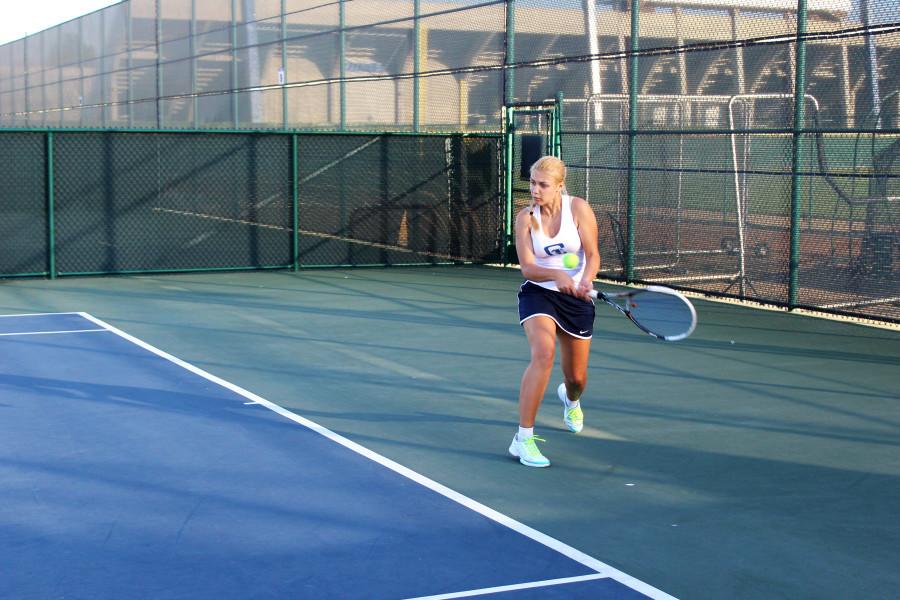 The Cerritos Falcons women’s tennis team came away with their second win in a row by a final of 8-1 at home against Palomar College on Feb 6.

The contest ended fairly quick as Palomar College came into the match a few players short of the requirement and therefore had to sacrifice three points at the beginning of the game.

The Falcons quickly took advantage of the 3-0 lead by winning two doubles sets, which effectively ended the game with before the singles matches even got underway.

Sophomore Merlii Alcasid made quick work of the opposition in her singles match sweeping both sets with tallies of 6-0 and 6-3 respectively.

Alcasid talked about how she made it look easy, “I tried my best on my serves. I tried to stay calm and not get frustrated and even if I messed up I recovered.”

Alcasid believes that the only trouble she ran into in this match was inconsistency on her serves.

The Falcons never let up against a short-handed Palomar squad that came into the game with only four players and almost got shut out had it not been for the only Falcon loss suffered on the day by freshman Mariia Yatsenko.

Freshman Anastasia Khomyachenko, fell behind early in her first set but was able to rally and win the match and win easily 7-5 and 6-0.

Khomyachenko said, “Just focus on my serve. Don’t do double falls and don’t hit from the baseline.”

In the first set however, Khomyachenko fell behind 3-5 and faced match point four straight times, winning all four and carrying the momentum over into the second set where she didn’t allow a point to her opponent.

She added, “I was just so nervous and I couldn’t calm down.”

Khomyachenko played with a lot of emotion in her match, constantly blurting out her reactions in her native Russian tongue as her teammates cheered her on.

The Falcons host Riverside College on Feb. 10 at 2 p.m. in a non-conference match.