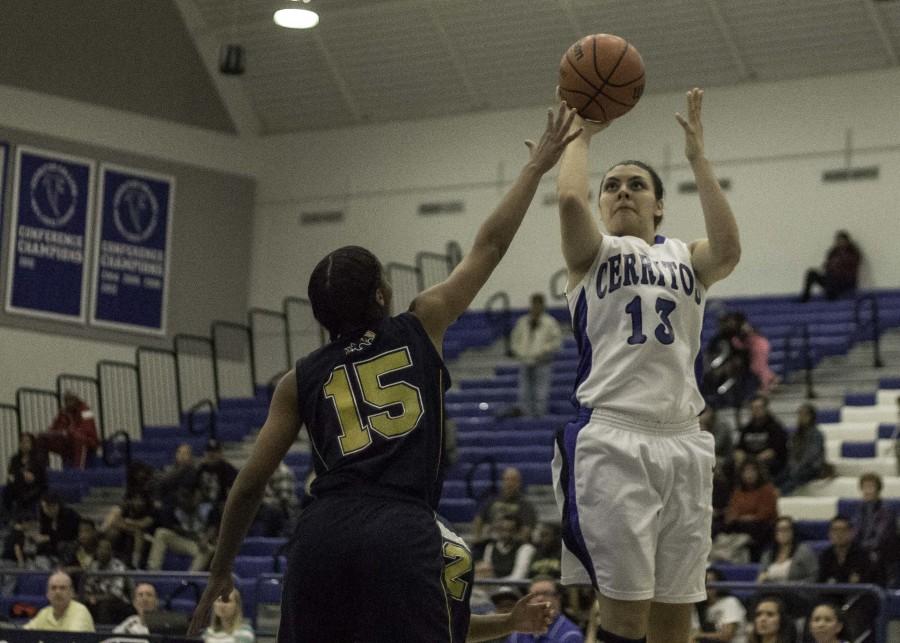 The Cerritos women’s basketball team ended the season with an overall record of 18-12 with a 5-3 mark in conference play, which was good enough to earn a playoff berth albeit as a low seed.

The Falcons will enter the single elimination tournament looking to make some noise and bring a title to Cerritos College, who they will play in the first round remains to be determined.

Despite not knowing who they will face, the Falcons are preparing as normal in the days leading up to the tournament and are ready for the chase.

Women’s head basketball coach Karen Welliver is excited for her team and know that the playoffs are a whole new season, “Once you get to playoffs everyone’s equal”

“Even though you have seedings, it’s one and done for everybody.”

Welliver is proud that her team earned a playoff berth because they don’t come easy.

“Not everybody gets to be there, so it’s something to really shoot for and work hard for,” she added.

The Falcons are coming off of two tough conference losses against teams that will be in the playoffs.

Welliver believes that her team can learn from the mistakes they made in the two losses and adjust for the playoffs.

“Those two games were really tough games against good teams, so they were like playoff games. We want to learn how to have more composure and just gain experience from it.”

Coming off of two losses to rivals might deter a team’s confidence, but as Welliver explained the Falcons have their heads up high.

The confidence in the players shows as sophomore center Selena Romero explained that practice has been business as usual in the days leading up to the tournament.

“We’re pretty much just doing the same thing that we usually do in practice. We’re working on our craft, getting better at certain things.”

Romero did acknowledge that the Falcons practiced new things and even added something new to their repertoire.

“We put in a new play so hopefully we’ll use it because so far everybody knows what we’re running,” she added.

Going into the playoffs, Romero and her teammates know that the upcoming games will be just as tough, if not tougher than the previous two, but the Falcons now have plenty of experience in these type of games and are ready to leave it all on the court for a championship.

“We’re going to treat this game like any other hard game that we’ve played like Mt. SAC or LBCC. It’s all going to be the same, we just have to play hard and work together,” Romero said.