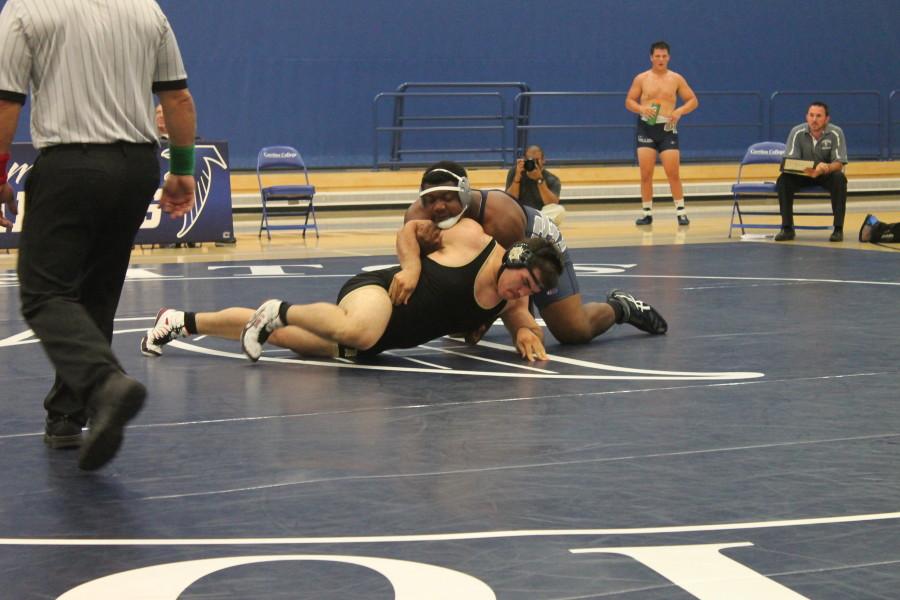 Robert Chism flew to Lindenwood University in St. Louis, Missouri, as he accepted a full-ride scholarship for wrestling and signed on Jan. 17. He arrived and started school on Jan. 24.“It feels amazing, it’s what I’ve been working for since sports came into my life,” Chism said.But before he started to duel in the mats, he played football his first two years at Cerritos.Head Coach Don Garriott was proud to see one of his wrestlers earn a scholarship for wrestling.“It feels great when one of your players accepts a scholarship. I feel like (the coaching staff) did our jobs as far as coaching is concerned,” Garriott said.Chism is a wrestler who was in the 285-pound heavyweight division and is ranked and no. 1 in state for his weight class.As a football player, he played on the offensive line as a center and was a first team All-American selection as Cerritos starting center.He also wrestled and played football at Downey High School.The decision he had to make was a tough one because he played both sports in high school, as well as college and he has a deep love for both sports.He said, “It was a hard decision to make; my family and friends helped me make it and I also had to do a lot of thinking before I made the decision.”There was a long list of scholarships that he got offered to play football and wrestling which consisted of Cal Baptist and Notre Dame Ohio for wrestling.He also got offers from Northern University and Ouachita Baptist for wrestling and Forthays for football.There is a reason behind every decision that is made, and in this decision he had to convince himself.“The reason why I chose Lindenwood was because it was the best choice toward my major, which is criminal justice.It’s a private school, so the classes aren’t as compacted with a lot of students so I knew I would get a better education and it can wrestle,” Chism said.Coach Garriott believed that Chism deserved the scholarship.“Robert had a good work ethic. Sometimes it’s hard for a good heavyweight to find people to push him in practice.“Luckily, we have another good heavyweight and they were able to push each other. Because of this, they were both able to qualify for state finals,” he said.In the state final, Chism would have to go against his own teammate Jesse Gomez, who was also in the same weight class as him and practiced with him every day.“We knew all season it would come down to them being in the finals against each other. By that time, we had already won the team title so it was just sit back and watch them beat each other up,” Garriott said.That match was one that the whole team had been anticipating and waiting for. They wrestled against each other every day, but this time it was different, they were battling for the state title.Chism said that that match was one of his toughest matches he had ever been a part of in his entire time of wrestling.He said, “It’s what we have been talking about and preparing for all year. We were both excited for the match, but I know we both wanted to win and we’re gonna wrestle all out.”“I know that’s what we both wanted. It was a great match, wasn’t easy but we both knew how we would wrestle, so I went out and wrestled,” he added.