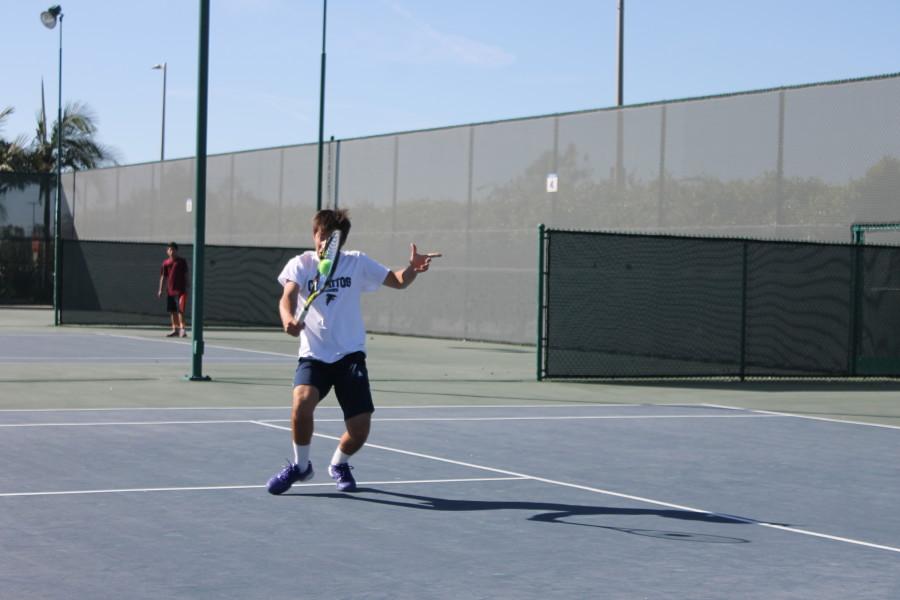 Agustin Lombardi in his singles match returns the volley with his backhand. Photo credit: Christian Gonzales

Men’s tennis extended their winning streak to five as they cruised against Mt. San Antonio on Feb.24. The Falcons played their first conference game of the season at home and won 9-0.

The Falcons next game is at home against El Camino College. It will be their second conference game in the season.

The Men’s tennis team record is 9-1 on the season and they are 1-0 in conference play.

The men started off with playing singles first.

The men took advantage of singles and went up 6-0. They looked for the shutout in doubles.

Head coach Alvin Kim said, “We really need to take it easy the next couple of days because we have a big match on Friday against Mesa (San Diego Mesa).”

He added, “The next game El Camino is down this year [so] we aren’t expecting it to be much difficult.”

Henry Ayesiga said “I want to say the match was easy but overall I think it was fair and I managed to win.”

Ayesiga mentioned, “For now on in the season [it] isn’t going to be easy so we will be ready.”

Mark Antoniuk said “It was a good match, it was tough in doubles, [but] coach helped us mentally to get our focus back.”

Antoniuk added, “We are going to play much better than we did today because Friday is a big game.”