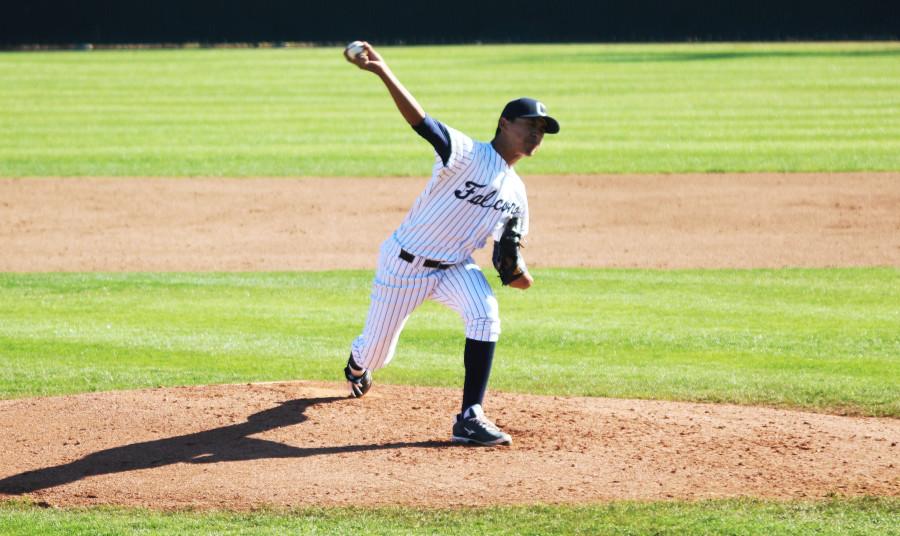 The Cerritos Falcons baseball team finished their preseason play of the 2015 season with a 3-2 victory over the visiting Golden West Rustlers.

The win also snapped a three-game losing streak for Cerritos before heading into conference play next week.

Sophomore pitcher Travis Bonner talked about breaking the losing streak, “Basically after that third loss we just all got together and said we have to execute more and play better as a team because we felt we were falling apart,”

The Falcons sent freshman right-hander Valentin Flores-Gomez to the mound against the Rustlers and he worked through five, giving up an unearned run on four hits and no walks, while striking out six.

Bonner said, “He [Flores-Gomez] came out and did what he needed to do, pitched the game he needed to pitch and [overall] he pitched well.”

Offensively the Falcons took the lead in the first and never relinquished it. In that first inning freshman outfielder Mark Pena led off the inning with a walk before being bunted over by sophomore pitcher Kyle Carpenter.

This set up an RBI opportunity for sophomore first baseman Brett Thompson, who dropped a blooper into center but Pena at second was unable to score.

Freshman catcher Gary James would then reach base on an error by the Rustler shortstop, thus allowing Pena to score the first run of the game and moving Thompson over to second.

Sophomore third basemen Victor Guadalupe then proceeded to hit a line-drive down left field line scoring Thompson from second and making the score 2-0.

The score would remain at 2-0 until the fifth, when Pena reached base on a throwing error by the Rustler pitcher and advanced into scoring position on a wild pitch before being singled in by Carpenter to increase the lead to 3-0.

The three-run cushion would prove to be enough for the Falcons as they managed to stave off a late rally attempt by the Rustlers and win 3-2.

Brett Thompson, who came up with big hits and good defensive plays talked about how big of a win this is for the Falcons after a slump like the one they went through.

“I think we feel pretty good. I think we’re trusting our pitching a lot more, we just have to keep playing defense and this was a big win for us so we’re just going to work with it.”

Thompson also felt that the Falcons are ready to excel in conference play after a tough preseason.

“I think we feel really well because we played against a lot of good teams in the preseason and saw a lot of talent, so I think a lot of our guys have a lot of confidence going into conference,” he added.

Head coach Ken Gaylord gave his input on his team’s performance. “You know we screwed up a couple of plays [defensively] but we made a couple of big plays when we really needed to.”

Gaylord believes that the Falcons have improvements to make because the Rustlers scored their runs on mental errors that can’t be made because good teams will capitalize on extra outs.

He said, “We kind of gave them all of their runs. We didn’t catch a ball at first, and then the ball in the dirt that we didn’t block. So we have to get a lot better at not giving the opponents so many free outs.”