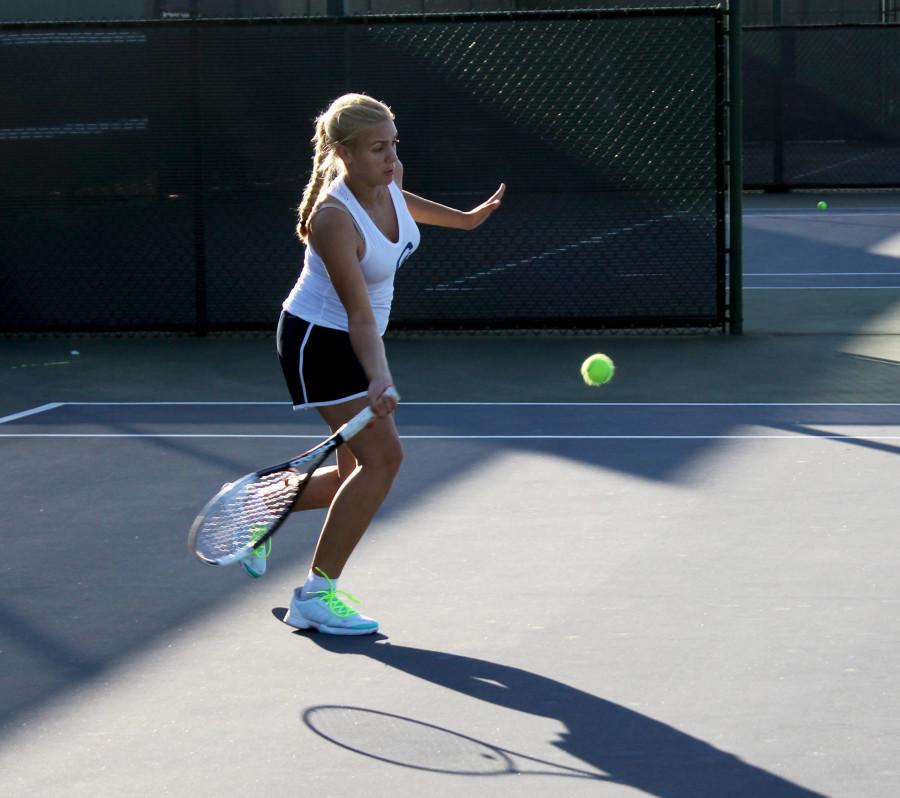 There are many students here at Cerritos College. Most of them are from the surrounding area, but there are a few that come from the other side of the world.

Freshman tennis players Mariia Yatsenko and Anastasia Khomyachenko are from the Ukraine and Russia respectively.

Yatsenko is from the Ukraine and started playing tennis when she was five years old.

She explained why she started playing, “My grandfather is so crazy about tennis and he started to teach me, then maybe four years later I got my first coach.”

Yatsenko played in many tournaments in her homeland, all of which only improved her play on the court and made the possibility of playing in the United States a reality.

When she first thought about the idea of playing in the U.S. Yatsenko said,”I started gaining interest in America maybe four years ago in the eighth grade,”

“In Ukraine we have international tournaments so it’s hard, but sometimes matches in the United States are so hard too so maybe the level is about the same,” she added.

All student athletes have different goals, but the majority of them compete in athletics in order to earn a full scholarship to a four-year university where they can achieve their academic goals.

Yatsenko is an exception to this.

“I want to become a professional tennis player, so I hope I achieve high results in tennis.”

Yatsenko is currently majoring in business at Cerritos College and takes pride in wearing navy and white colors of Cerritos every time she takes the court.

Despite being so excited to be in the U.S., Yatsenko admitted it’s been a challenge for her adapting to a new country.

“It’s hard to live in America because I have so many problems with English, but I hope that I can improve my level [of play] here at this college,” she said.

Aside from having trouble adjusting due to the language barrier, Yatsenko likes America a lot, she said, “America is better than the Ukraine because the quality of life is better and you get to study,”

She added, “My mom wants me to get a good education and my father wants me to play for the college and university.”

Like Yatsenko, Khomyachenko has also had to deal with the language barrier here in the U.S., but she is learning fast and adapting by the day.

In order to succeed in sports, one must have a solid competitive mindset, while also staying calm and collected at all times in order to maintain concentration and focus, which are both essential components winning.

While she may wear her emotions on her sleeves, Khomyachenko is a competitor who feels that every game is different, “It’s not really hard, not really easy, you just need to be concentrated for each game.”

She hopes to accomplish many things, “I want an education. I haven’t decided [on a major] yet, but I think I want to be a dentist. I’m [also] interested in psychology, but I don’t know I haven’t decided.”