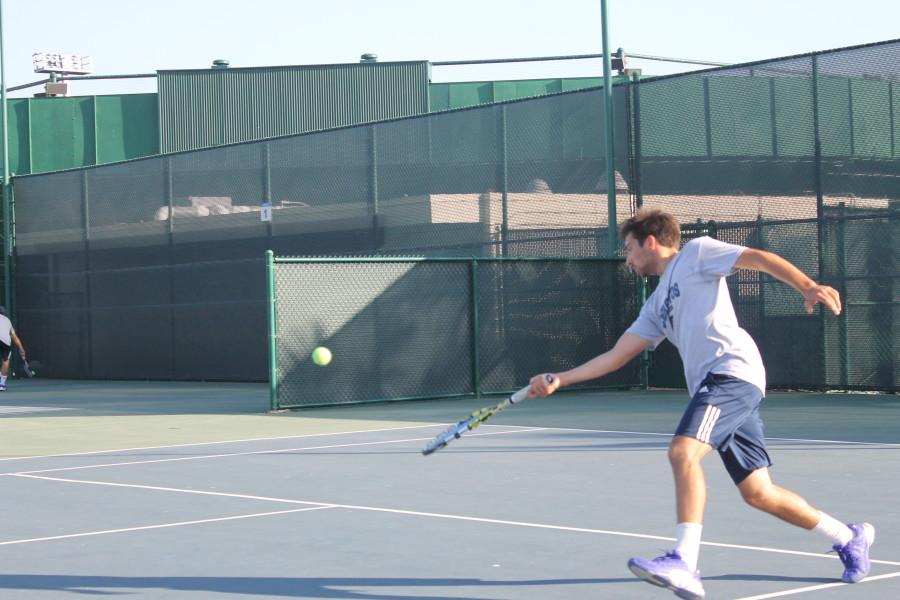 Agustin Lombardi returns the ball as he approaches the net in his singles match. He went 20-6 in singles matches this season. Photo credit: Christian Gonzales

Kim said, “The players did exactly what we expected them to do. I felt that we should have maximized the team a little bit, but we are still a top five team.”

The majority of the team consisted of foreign players that had agreed to play with the standards that are set here in the United States.

Sophomore Milo Zoric really liked the way the team shaped out this season.

He said, “I felt pretty good, I liked the atmosphere of the team this year than last year because we had different players from different countries and different cultures and we are all different.”

Coach Kim commented about its improvements, “I felt like we struggled a little in doubles, we have always been a doubles-driven offense last year and this year we haven’t been too stellar.”

The 2015 season for the Falcons can be considered a fountain of youth, due to the fact that there were many freshmen on the team that had much to learn.

Kim said about the young players, “This is the first year for many players so they have a lot to learn for next year.”

Freshman Mark Antoniuk had mixed feelings toward playing his first season as a Falcon.

He said, “It was unusual because when I was playing in my home country, I never played three months in a row and three times in a week. It was tough, but cool and interesting in the same time.”

As one of the freshman on the team, Antoniuk believes that one improvement that the teams needs to progress on is team maturity.

“We need to improve on our attitude and focus more on the game and take the matches more serious. This season was a bit distracting and young because of all the freshman on the team,” said Antoniuk.

Coach Kim is excited for next season due to the many leaders that he will have.
“We’re going to have good leaders who are returning next year,” he said.