Not Another Cinderella Story 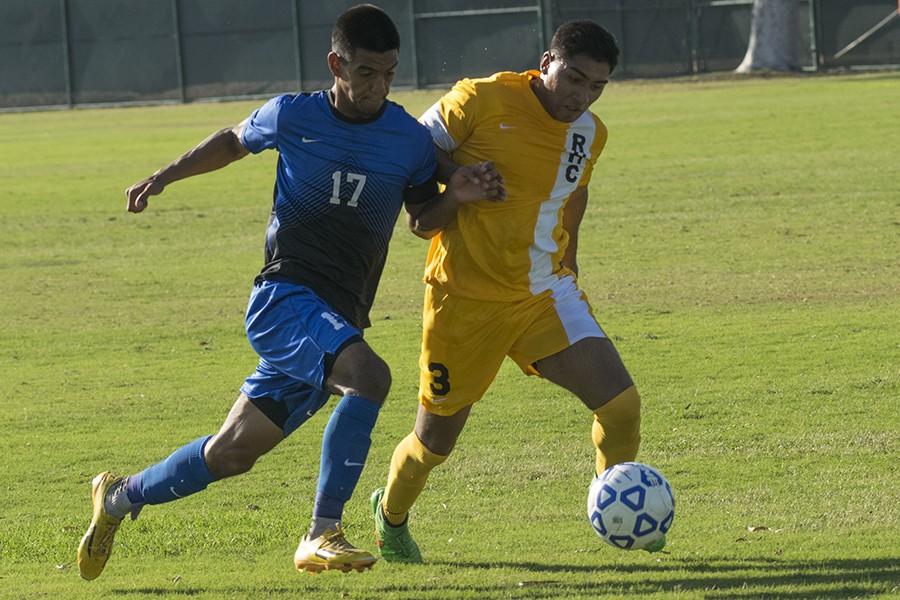 Captain Christian Carrillo (left) killin' it against a defender from Rio Hondo. The end score of the game was 4-2 in favor of Rio Hondo Photo credit: Kevin Cruz

The men’s soccer team played against Rio Hondo College was a bit of a Cinderella story ending in a 4-2 loss.

The underdogs came out on top to grab the win.

Unfortunately, the underdogs were not the Falcons.

Cerritos College was off to an excellent start to the game.

Team captain, Christian Carrillo, set the tone for the first half by scoring the first goal within minutes of the kick-off whistle.

They held Rio Hondo College to a score of zero for a good amount of time.

Cerritos College popped off another goal by freshman player, Mark Cruz, with about 12 minutes left in the first half.

“The intensity dramatically changes when you switch out a line,” Head coach Benny Artiaga said, “But that’s something [we] are going to have to build upon and learn from.”

Shortly after the second goal, Cerritos College let one go in for Rio Hondo College.

Not much time had passed when Rio Hondo College scored, yet, another goal.

Half time was quickly approaching.

“Our positioning was off,” freshman Jason Arejei, said, who is out with an injury. “A lot of [our] team members are [incoming freshman] mistakes are bound to happen, but [we] learn from our mistakes.”

Unfortunately, that lesson did not come quick enough.

A third of the way into the second half another goal was scored, making the score 3-2, in favor of the opponent.

Fatigue, defeat and frustration began to sink in when the fourth goal came about against Cerritos College.

It seems that the Falcons counted itself out before the game.

“[We] stopped being aggressive. With the strategy we play everyone needs to put in work,” Carrillo said, “After, the first two goals were scored, I guess, some of the guys just couldn’t handle it.”

It was something that proved difficult to come back from.

The final whistle had blown, and the game ended, with Cerritos College loosing against Rio Hondo College 4-2.

According to Arejei, there was one thing that he felt held them back from capturing the win, “Overall, [we] just weren’t humble enough. [We] saw the early goals as an advantage and in the end, that was our down fall.”