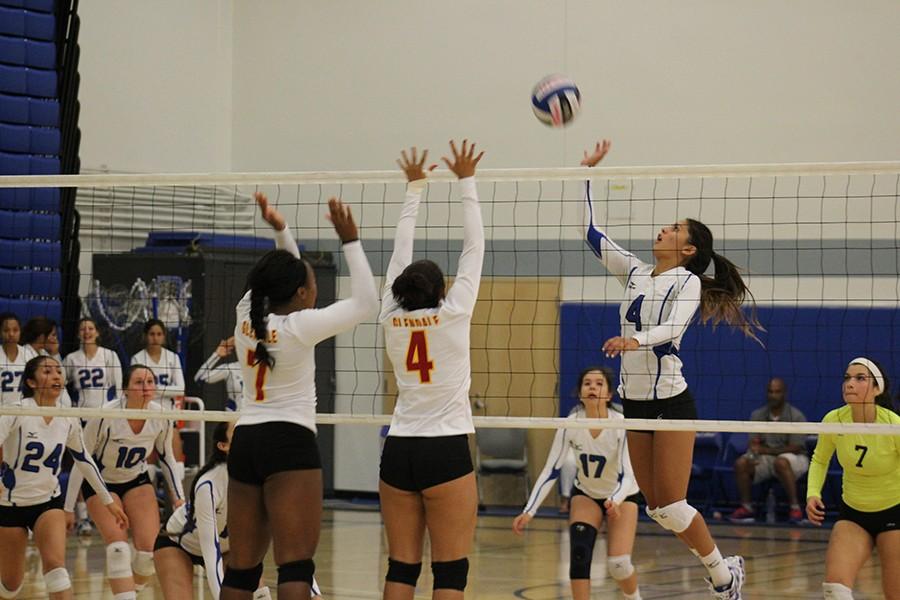 Nicole Spigner jumps to just tap the ball to the other side. Spigner had a team high of 8 kills. Photo credit: Christian Gonzales

Cerritos volleyball team earned key wins to place it in the championship bracket for a chance to win the Cerritos tournament.

In the first match Cerritos College faced Glendale College at 11 a.m. and defeated Glendale in three sets [25-11, 25-20, 25-17].Outside hitter Nicole Spigner, had a big impact in the game, finishing the with eight kills and also adding with 10 digs.Head coach Teresa Velasquez-Ortega said, “We are happy where we are today as a team we won all three games. Overall I think the team competed very well.”After defeating Glendale, the Falcons had a rest period and waited for their next game to start, which was not until 3 p.m. The team looked to build confidence after winning their first game and maintain for the second and third match of the day.

Sophomore Libero, Jasmine Peralta, helped the team with her services as she recorded with five service aces and 19 digs.

“I felt really confident in my team cause I knew we wanted to win and come out and be the better team,” Peralta said.Finishing the match at 4:40 p.m. Cerritos College had to prepare quickly for the next game at 5 p.m. that was against Santa Monica college.Building confidence after winning two matches Cerritos College prepared for its third match.

Cerritos College pulled away with the first set winning 27-25, but Cerritos lost confidence in the second set losing 13-25.

Sophomore Setter Natalie Caravantes had the team high 30 assists in the match.”When one person is down it just brings everybody down and that’s just what happened,” Peralta said about dropping the second set to Santa Monica College.Cerritos College only dropped one set in the first day of the tournament and looks to continue success in the second day.Caravantes said, “I felt we did really good as a team and that’s the reason we went 3-0.”Cerritos College in the second day will play Yuba College at 9 a.m. If Cerritos College gets a win in the match against Yuba, it will put them in a 1 p.m. semifinal match against either Orange Coast College or Santa Monica college.