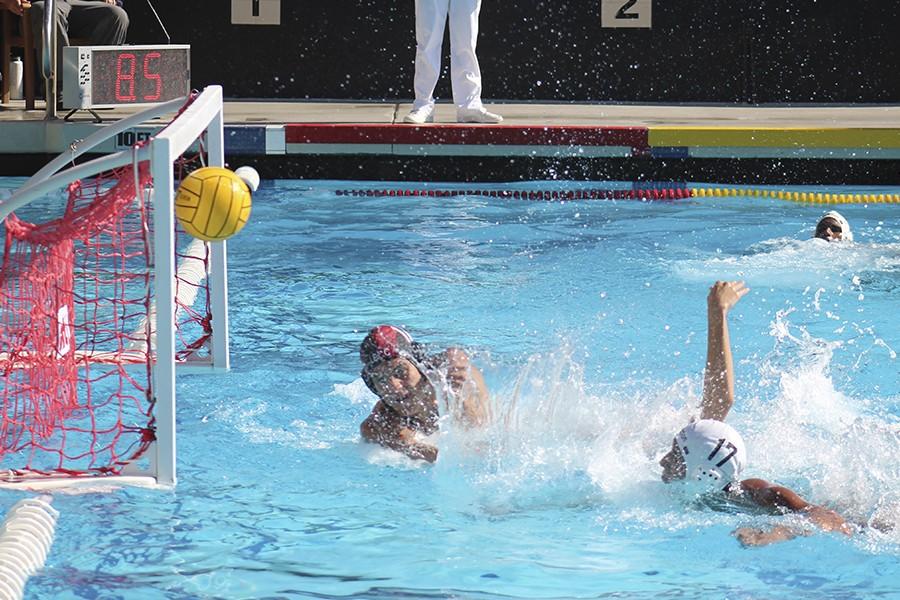 Angel Rojas made a pass to Israel Rodriguez and Rodriguez tapped the ball in for the goal. Rojas was one assist shy from 100 assists in the season. Photo credit: Christian Gonzales

Moreno fractured his thumb on Wednesday morning at practice, and Roldan was in a car accident and suffered a broken arm, Roldan’s defense as he had 66 steals.

Moreno is a key part of Cerritos offense as he scored 105 goals, Moreno’s 105 goals and Rojas’s 155 goals Cerritos had its first two-player 100-goal scorers in the program’s history.

The team cruised over Cuesta defeating them 15-5 with Rojas scoring nine goals.

Cerritos lost focus, and was defeated, 18-12, which eliminated them from chance to play in the CCCAA State Tournament.

Israel Rodriguez scored four goals against Long Beach City and played big for the Falcons with the teams key injuries.

Rodriguez finished the season with 46 goals and 24 assists.

Then in the third place game, the Falcons lost to Los Angeles Valley College 16-10 which ended its season.

Angel Rojas this season has been a complete team player. Rojas this season broke records for most goals, assists, and steals in a season, as he over achieved the past records in goals (155), steals (105) and assists (99). He was one assist away from being the Cerritos’ first player to record over 100 in each of the three categories.

Angel Rojas on his season, “I play hard and give my best and play smart water polo.”

Head coach Joe Abing said, “We played with a lot of passion we lost two of our started and two key guys we are top four in Southern California,”

He added, “[Rojas] just an incredible player he could do it all he could score and he is also able to find his teammates…he is a special player.”