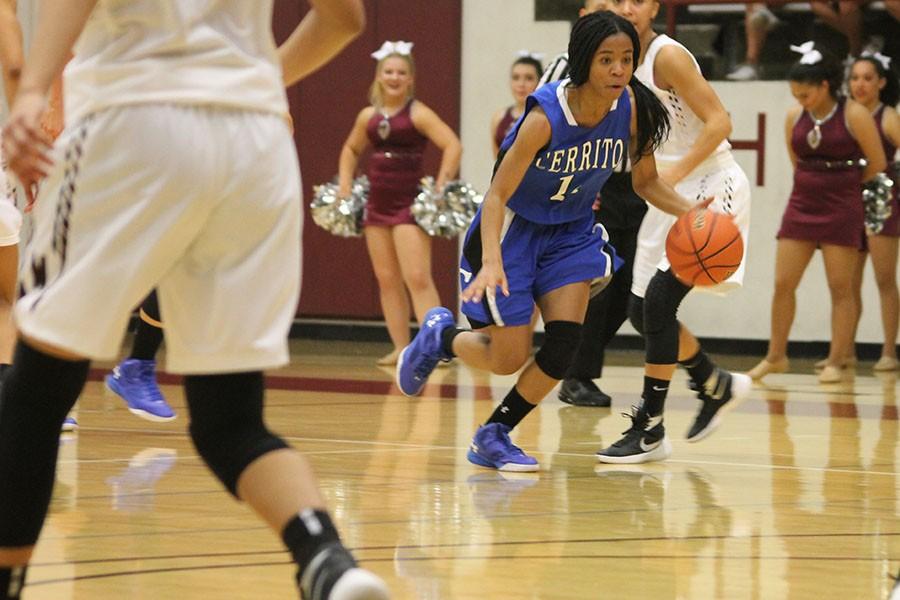 Early foul trouble proved to be the difference for the Cerritos women’s basketball team as it fell to Mt. San Antonio 79-60.

“For us [Ashley Flores and Crystal Lomax] to be three of the biggest people on the team and for us not to be out there really hurt us when it came down to rebounding,” sophomore forward/center Miranda Valentin said.

The Falcons were out rebounded only by six however, the second chance points is what killed them as they were outscored 18-6 in that category.

“That’s probably one of the biggest teams we’re going to see, really versatile players so if you’re not in a [defensive] stance ready to go sometimes you can get caught,” head coach Trisha Raniewicz said.

They were on the floor for 36 minutes out of a possible combined 120 minutes.

“I feel like they [the officials] could’ve called it a little more tight, but we were the away team so it doesn’t always go in our favor sometimes,” Valentin said.

Sophomore guards Kennedi Cooper and Verenice Gomez combined for nine of the team’s 28 turnovers, which translated to 37 points off of turnovers by the Mounties.

“Its composure. Be smart with the ball, run our plays; we just were supposed to take care of the ball but I don’t know what happened tonight,” a visibly disappointed Cooper said.

Raniewicz chose not to go with Cooper to start the second half as the team was down 45-23 at halftime.

“[It was] purely […] the choice to not play with the amount of effort against a team like Mt. Sac […] I think Kennedi [Cooper] is capable of playing at a top level, so I’m going to encourage her to continue to do that,” Raniewicz said.

Instead of going with Cooper at the start of the third quarter, Raniewicz chose to go with the hot hand of sophomore guard Janel Oliver.

“It was a big game since they are the number one team in the state so I had to do a lot of scoring,” Oliver said.

Oliver only played ten minutes the previous game against El Camino Compton and was averaging just over three points a game, before the 15-point explosion.

Raniewicz was not surprised in the slightest.

“I think Janel [Oliver] is a captain for a reason. She isn’t just talking about, she is about it.

“I think she’s the player of the game for me in terms of going after it being aggressive and no matter what playing hard for 40 minutes.” Raniewicz said.

Oliver wasn’t the only star on the offensive end as freshman guard/forward Allyson O’Brien scored a team-high 17 points on seven of 12 shooting and showed a tremendous amount of heart in the eyes of coach Raniewicz.

“I thought that she attacked, she is extremely versatile,” Raniewicz said.

O’Brien was proud of her performance following the game despite the loss.

“I get it from the other teammates. Janel [Oliver] did a good job hyping everybody up and she started us off, we kind of just went off of her. I just wanted to keep it up and keep [the game] as close as possible,” said O’Brien

This was the third time the 18-1 Mounties defeated the 13-6 Falcons, once during the College of Sequoias Tournament and the second time at the Fullerton Tournament.

Both games were decided by a combined 29 points, before the 19 point-bashing Friday night.

One thing Raniewicz was able to take away from the game was the fact Cerritos won the second half 37-34.

“We won the second half and that was the goal we had coming out of halftime.

“That should give us confidence that we can play with a team of their caliber,” Raniewicz said.

She followed the statement by optimistically stating, “The good things is these are things we can get better at for the next time we see them, possible in the playoffs you never know.”