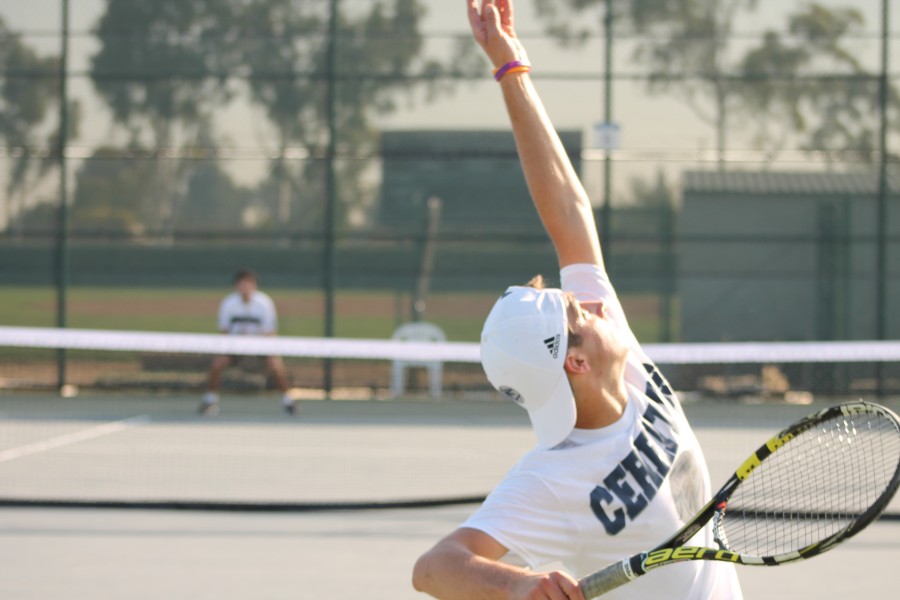 The men’s tennis team played against Mt. San Jancito in what was a moderately contested affair, and was successful in its first home game of the 2016 season.

“We have a deeper roster this year.” said head coach Alvin Kim, who continued to tout his team.

“Winter training really developed the guys this year,” he added.

The training would be more than prevalent in the tennis play at hand, as the Falcons won just about every match against San Jancito.

While the singles section of the day was a sweep for the Cerritos Falcons, Mt. San Jancito did not go out without a fight with their captain; Nico Tessi, a french player.

The highlights for our team include Nikita Katsnelson half hour contest with Tessi, and a strong performance from team leader Augustin Lombardi in his singles match up.

“I’m happy our guys won,” said projected number one player Olexandr Krasnov, who was disappointed about not playing, being benched for a sprained wrist, but still expressed his joy for his teammates.

Another benched player, Kyle Konishi, showed a subtle frustration when he laughed off forgetting his shoes, “I forgot my shoes.” He said, which ultimately resulted in a benching from coach Kim.

The two teams calmly shook hands in a line around the net when it was all said and done, a quaint appreciation for the competition.

As the team continued to dominate in the doubles section toward the end of the day going into next week’s match up at Riverside.

But its eyes are set on Thursday, Feb. 4 match with state champions Irvine Valley.