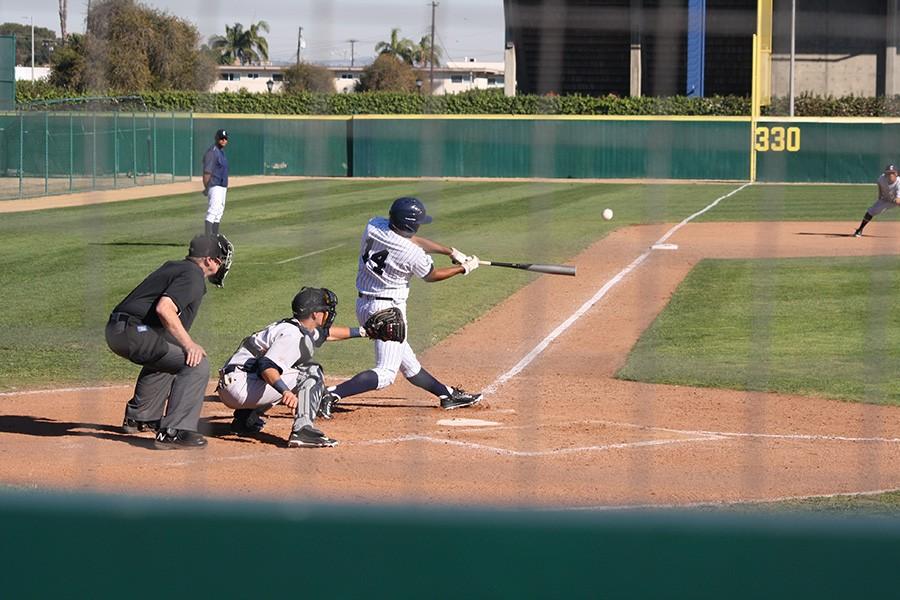 The second home game of the 2016 Cerritos College baseball season started out slow, but ended up being a win.

Coming off a 3-1 defeat to Glendale on Tuesday, the Falcons started the game in a 2-0 hole, but managed to work their way back and eventually blow the game wide open as Cerritos escaped with a 7-3 victory over the Citrus College Owls at Kincaid Field on Thursday afternoon.

Catcher Gary James went 3-for-5 with a pair of doubles, two RBIs, and a run scored, while outfielder Fermin Beza went 2 for 3 with a solo home run, the first of the season for the Falcons.

James would add another double, this one knocking in two runs, in the bottom of the eighth inning.

“I just wanted to keep the ball fair,” he said of his second double. “I had runners at first and second, and any hit would score at least one run,” James said.

After the Owls drew first blood with two runs in the top of the first, Beza got Cerritos on the board with a booming shot to left field.

“I didn’t think it was going over the fence. I was just trying to hit it as hard as I could and I was sprinting thinking it was going off the wall, but at least it was a home run,” Beza said.

After Beza’s bomb, James crushed a long double off the right field wall to put the tying run in scoring position.

“I was just trying to hit it hard. I didn’t intend to hit it over the fence, and I just wanted to put it in play,” James said.

Shortstop Daniel Lopez hit a perfect 3 for 3 and finished a triple shy of the cycle.

Travis Bonner pitched the majority of the game after starter Jonathan Marriott only lasted 3.2 innings and was pulled after loading the bases with a walked Citrus batter.

He also got credit for the win as he is now 2-0 to start the season.

“We have been taught to play in situations like the one we were in. I just had to learn how to pound the [strike] zone and know that anything can happen,” Bonner said.

Much to the delight of head coach Ken Gaylord, the team drank in every word he said and followed through on his directions.

“[Citrus] can hit well, especially in our park,” Gaylord said. “Last year they had us in a 6-0 hole because of all their big bats, but we came out swinging today.

“[Bonner] pitched well. After [Marriott] got into a jam, he came in and did a great job carrying the [pitching] load,” he said of Travis Bonner’s performance.

Bonner did get pulled with one out in the top of the ninth and Jerald Johnston came in to close it out.

After some back and forth run scoring in innings two through four, second baseman Derrick Edwards got an RBI single in the bottom of the fifth that gave the Falcons the lead to stay.

In the bottom of the seventh, Lopez would crush a solo shot off the left field foul pole for his third hit of the game.

With the win, Cerritos improves to 2-1 overall.

The Falcons will be back in action on Saturday, Feb. 6 at noon when they host Victor Valley College.