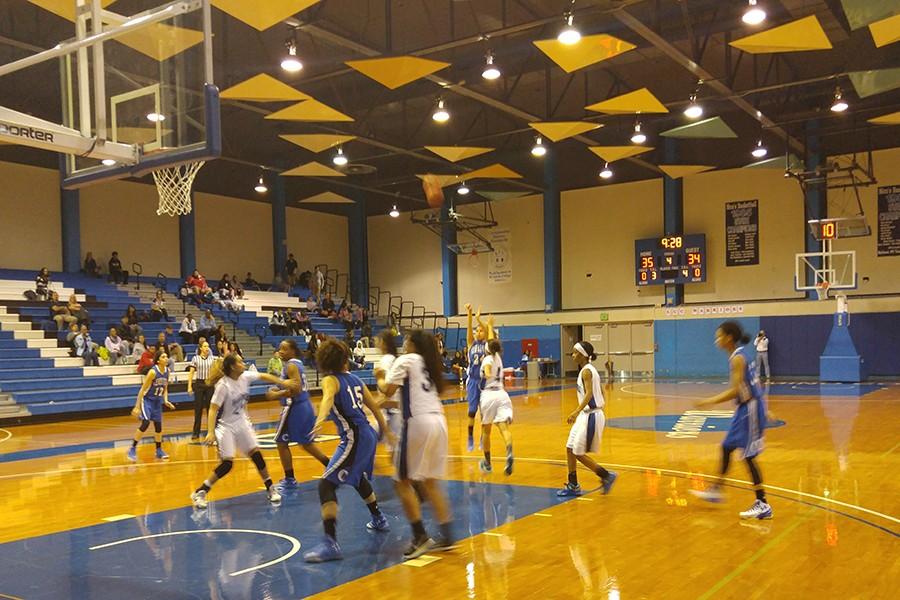 Allyson O'Brien (No. 20) shoots a three ball over Kyla Jolly (No. 4) of El Camino. O'Brien scored 13 points, all of them in the second half. Photo credit: Taylor Ogata

The last thing the Cerritos women basketball team needed prior to the season finale against Long Beach City was a loss to El Camino.

But that’s exactly what happened as the team fell 60-50 on Wednesday Feb. 17.

“Rebounding is all about battling, getting in there and not being denied the ball,” head coach Trisha Raniewicz said.

From the outset things didn’t look good for Cerritos, as forward Miranda Valentin was not cleared to play due to a sprained ankle.

According to Valentin it doesn’t look like she will play Friday, Feb. 19 against rival Long Beach City.

In addition to that forward Ashley Flores was removed from the starting lineup after being late to shoot around.

Subsequently, the team was out rebounded on the night by a El Camino team that won the rebound battle the first meeting as well.

“I think El Camino out rebounded us from the start of the game. [It] made big plays when [it] needed and kept us from getting a rhythm while playing a zone,” Raniewicz said.

“I feel like we need to all put a body on someone and crash the boards. We need to make it our absolute goal to out rebound Long Beach City,” Flores said.

In the first meeting between the two teams the Falcons came away with a 72-53 win over the Warriors.

This time around the offense was hard to find.

“I think we shot pretty well especially from the three-point line, personally I wish we were a little more aggressive and had more effort,” O’Brien said.

“They just out played us […] We’re a good enough team to be able to pull through. We just couldn’t do it tonight,” she added.

O’Brien scored all 13 of her points in the second half and was one of two players in double figures on the night.

Guard Verenice Gomez was the other with 12 points.

Despite not being able to be crowned conference champions Cerritos will face rival Long Beach City Friday, Feb. 19 in the regular season finale.

“I know we are capable of battling on the boards against Long Beach City and I think it will be a crucial part of helping us get the win,” Raniewicz said.