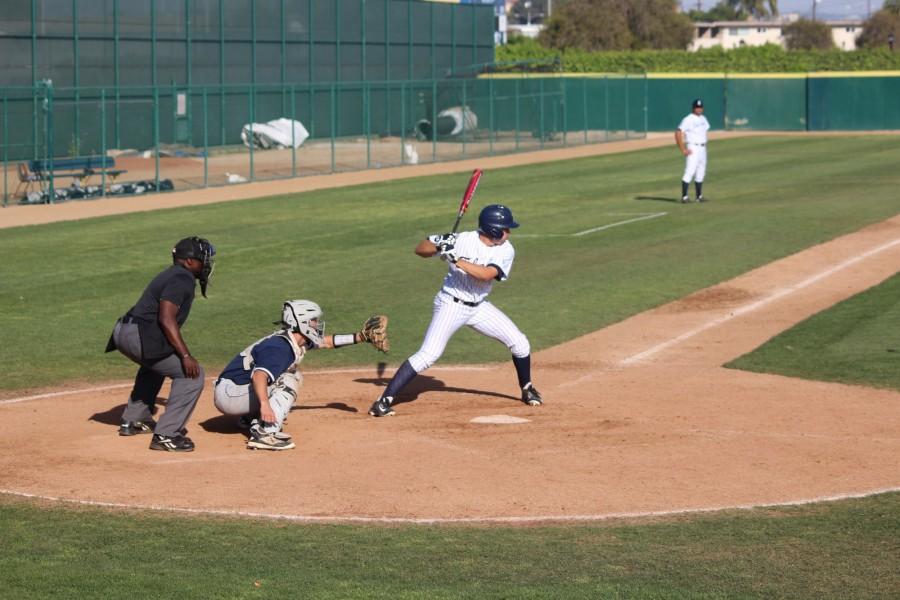 Mark Pena gets ready to swing away. Pena went 1-for-4 with his hit setting a new school record for hits in consecutive games. Photo credit: Taylor Ogata

Mark Pena set a new Cerritos College baseball record with his 24th consecutive game with a hit on the Tuesday Mar. 1, but in a losing cause.

Although the Falcons scored first, it was only a single run for the entire game as the Los Angeles Mission Eagles got a three-run home run in the top of the fifth to take the lead for good.

An RBI-double in the top of the seventh pushed the lead to 4-1, and that ended up being the final score in favor of the Eagles.

Pena led off the bottom of the first with a single up the middle to break the school record originally set by Jerry Pena back in 2008.

Mark said, “I didn’t even know about it until I heard the announcement over the P.A. system, however, we have to execute with runners on base and play better as a team.”

The Falcons left eight runners on base for the entire game.

“We have to get [runners] on base and we also have to take advantage of runners on base, especially when they are in scoring position,” head coach Ken Gaylord said. “We had a lot of chances to score runs, but we hit into routine double plays and that doesn’t cut it.

“It’s a good record to break and I feel happy for [Mark], but it really didn’t matter in the game,” he said of Pena setting the new record for hits in consecutive games.

Cerritos had the 1-0 lead up until the top of the fifth when Falcon pitcher Jacob Carter was taken deep to right field by LA Mission’s Willie De La Barcena with two men on to put the Eagles in front.

“[Carter] missed the target I set for him,” catcher Gary James said. “We got a little mixed up and he threw the ball into the wrong spot and the batter crushed it over the fence.

“I have never seen a record broken before, but I do feel good for [Pena],” he said of Mark’s record-breaking hit.

The Falcons got on the board in the bottom of the first, when Fermin Beza roped a single into left field to score Mike Heenan, but that was all they got.

In the top of the seventh, two innings after the Eagles took the lead, Lukas Granado extended the lead for LA Mission with an RBI double.

With the loss, Cerritos drops to 7-4 overall.