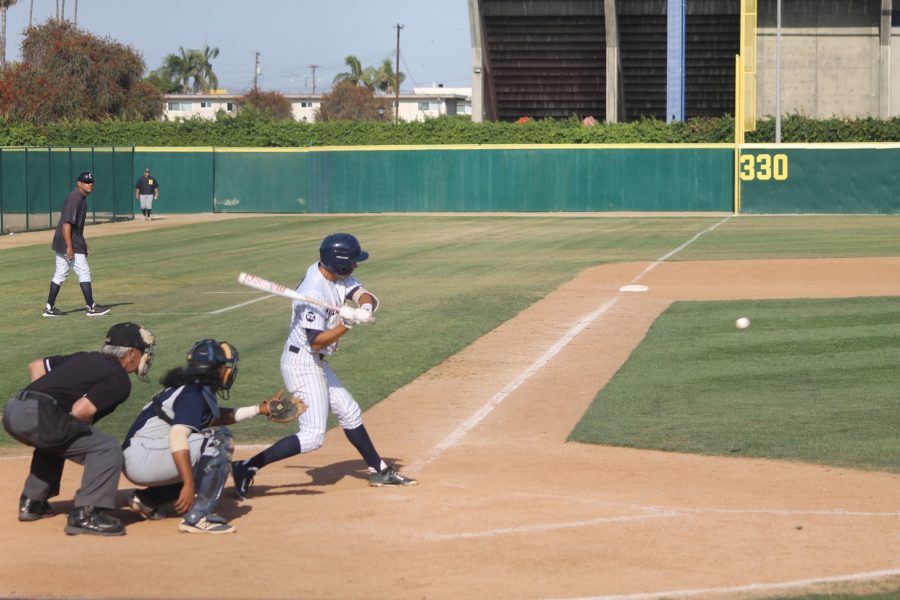 Daniel Lopez swings quickly to send the ball flying over the left field wall for a two-run homer. Lopez leads the team with four home runs on the season as of Tuesday. Photo credit: Taylor Ogata

After a three-game sweep of El Camino College, the Cerritos College baseball team was in a tie atop the South Coast Conference standings with Long Beach City College.

Cerritos finished the 2016 regular season with an overall record of 23-13 and 15-6 in conference play, which is good enough for second place in the South Coast Conference.

In the first game at Kincaid Field, the Falcons surrendered the first runs of the game thanks to the Seahawks getting hits right from the get go.

In the top of the third, Harbor took advantage of some costly Cerritos errors starting with Adrian Ramirez hitting the Seahawks’ Julian Villegas with a pitch after the Falcons got two outs.

The Falcons then threw a series of wild pitches which allowed Harbor’s baserunners to steal bases and eventually come in to score as the Seahawks took a 5-0 lead after three and a half innings.

In the bottom half of the inning, Daniel Lopez crushed his team-leading fourth home run of the season, a two-run shot to left field to get Cerritos on the board.

“We put in a lot of time working on our batting during the off-season,” Lopez said.

“Most of the time, I am just able to make contact, but there are some times when I get the sweet spot of the bat on the ball.

“We have spent a lot of time playing catch-up and coming from behind to win games. Other days, we can’t come back, and [Harbor] came out swinging today which is why our comeback fell short,” he added.

Innings four and five saw the Falcons score a run in each inning to get back to within one, but in the top of the sixth the Seahawks pushed the lead back to five runs with a pair of two-run base hits.

An RBI single by Kenton McDonald in the eighth and a run on a Harbor error in the ninth got Cerritos back to within three, but that was as close as it would get as the Seahawks took the game 9-6.

The Falcons, despite taking an early lead in the first three innings, fell apart in the fourth inning as the Seahawks scored 10 runs in their half of the inning to chase starting pitcher Jonathan Marriott.

The bullpen didn’t do much better as it surrendered nine more runs en route to a 19-6 Harbor victory and the first series defeat for Cerritos this season.

The Falcons returned to Kincaid Field the next day looking to salvage the final game of the season, and they got right down to business.

After holding the Seahawks scoreless in the top of the first, Cerritos put up two runs in its half of the inning followed by two more in the second to take a 4-0 lead.

Mark Pena made it 5-0 with a base hit to score Eric Hefner in the fourth.

“We have to play every game like it’s important,” Pena said. “We lost our focus and let our emotions and other matters get the best of us this series and if we’re going to with the state title, we have to play together.

“It doesn’t matter who we play, as long as we play well, we should be fine,” he added.

Harbor got a pair of runs in the the top of the sixth, but Pena hit into a fielder’s choice to score Lopez and ended up at second base after a wild throw to first by Harbor’s second baseman Cody Lavender.

Lopez, who ended the season swinging a hot bat, said afterward, “We have to hit the ball hard and often. We also have to tune up our skills because we have more games to play, and we have been playing teams that are good.”

The playoff seedings and match ups will be determined on Sunday, May 1 at a CCCAA athletic director’s meeting.

The playoffs begin on Friday, May 6.