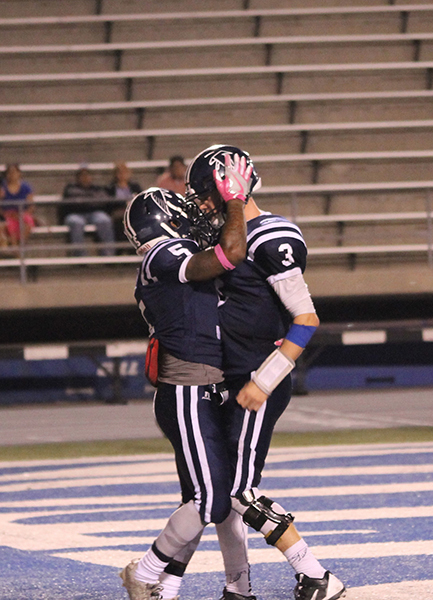 Quarterback Nick Mitchell (No. 3) and running back Kishawn Holmes (No. 5) celebrate in the end zone during the homecoming game against Santa Monica. The 35-point outing set a new season-high for the Falcons.

It took until Homecoming night, but it looks as if the once struggling Cerritos College offense seems to have found its way.

The Falcons were able to overcome a slow start on its annual night to defeat Santa Monica 35-13, Saturday, Oct. 15.

The home crowd looked to be at a loss for words when the Falcons fell behind 13-0 with 12:07 left to play in the first half.

Defensive coordinator Tom Caines felt the bye week had a lot to do with the slow start.

“We were a little bit rusty coming out of our bye week, so once we shook off the rust we started playing more like we do,” Caines said.

From that point on Cerritos would put 35 consecutive points on the board to stop Santa Monica in its tracks.

The rushing attack was used early to open up the aerial attack for the Falcons.

Despite much success on the ground Holmes had yet to find the end zone by way of a carry.

“It was never a monkey [on my back], it was a team effort. Now I happened to see the pay dirt three times so I feel good now,” Holmes said.

He would end the night with 15 rushes for 93 yards and three touchdowns.

Quarterback Nick Mitchell recognized the play of Holmes by saying, “[Holmes] has done a great job this year running the ball and opening up the passing game.”

Querale Hall also got in on the action racking up 86 yards on just six carries.

Because of the success on the ground game Mitchell was able to get into a flow early and find success often, much to the pleasure of his head coach Frank Mazzotta.

Mazzotta praised Mitchell for his improvement on the field, citing “We’re only as good as our quarterback.”

One of the beneficiaries of Mitchell’s progression was wide receiver Matt Rosales.

“I mean [Mitchell] was really scrambling, he was finding some open holes. He’s really good on his feet and really mobile so he found us. He hung in there and took some shots. That’s the strongest guy I’ve ever seen to stand in there and take them shots,” Rosales said.

Rosales would finish with six receptions for 84 yards and a touchdown.

Mitchell chimed in on the big night for his wide receiver.

“’Rosie’, he is a baller. He’s had a touchdown in [three of the last four games], he almost had two tonight. He’s a good player and I just love throwing him the ball,” Mitchell said.

This is the second time in the last three weeks that Mitchell has seemed to gel with a particular wide receiver. October 1 at Riverside, it was wide receiver Stacy Chukwumezie, now its Rosales.

Mitchell acknowledged that he is growing more comfortable within the offense.

“I love all of our receivers, I just feel like we’re improving each and every week so I’m excited to see where we can be in the next couple of games,” Mitchell said.

Though at times he has been critical of him at times, Mazzotta sees the advancement in the game of Mitchell.

“He’s been criticized pretty heavily, [Offensive coordinator Dean Grosfeld] gets on his ass big time. The tough thing for us as coaches is he’s new to the program too. He’s like a freshman too.

“He just has to settle down and do what we ask him to do. He’s throwing the ball better, he’s worked on some of his mechanics. Some of his mistakes are mental,” he added.

The 35-point showing would mark a new season-high for the club. The next chance to improve on this showing is Saturday, Oct.22 at Bakersfield.

After a forgettable first 18 minutes of football the defense settled down and forced five Corsair turnovers.

Cornerback Brandon Ezell was the recipient of two of the turnovers himself, including an interception that went for a touchdown.

“The receiver ran a little screen and the [other] receiver came to block me and I saw it so I jumped the first receiver and made a play on the ball,” Ezell explained.

Forty-five seconds after Ezell’s interception, Tyler Rios went and got one of his own. Overall the Falcons forced five Santa Monica turnovers.

The defense seemed to be trying to one-up each other on the field and that’s something that Mazzotta likes to see.

“We’re top-five in Southern California and we’ve played the other four. We’ve played all of them, so I don’t think we’re going to play better defensive teams,” Mazzotta said.

As if that wasn’t enough Ezell wasn’t finished. Late in the fourth quarter, Ezell skied for a pass in the back of the end zone and would come down with a one-handed interception, his second of the night.

“This time, I knew the ball was coming my way. I didn’t know why but I just had this feeling, my brother Kijon [Washington] was filming me so it was one of those times for me to get a nice play on camera,” Ezell said with a smile.

That was the second one-handed interception of the season for Ezell, his first came on the road against Golden West.