Cerritos on outside, looking in after loss to Moorpark 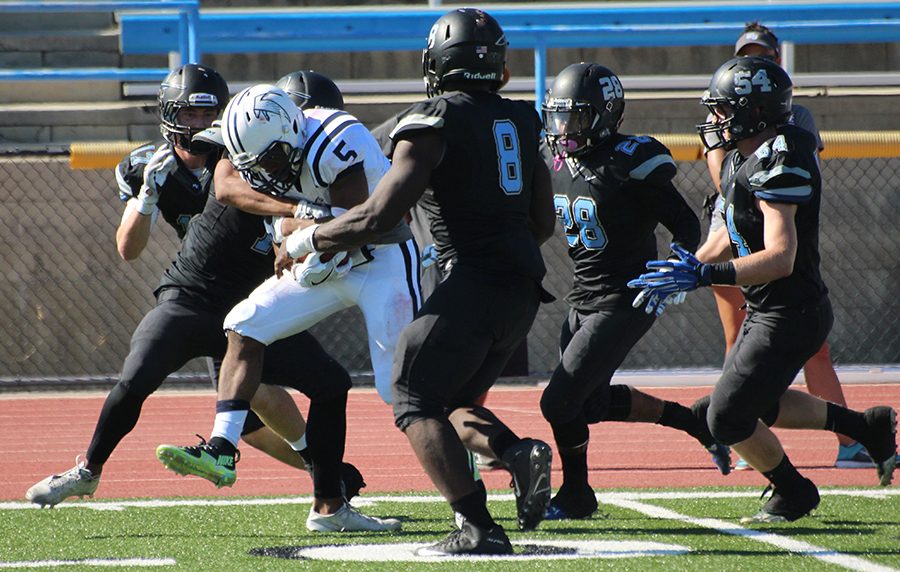 Cerritos' running back Kishawn Holmes is gang tackled by 5 Moorpark Raiders. Although he rushed 30 times for 185 yards, the team was not able to successfully earn a win over the Raiders, falling 35-28.

For the second consecutive season, the Cerritos Falcons visiting Moorpark had some serious playoff implications and again it came down to the last drive of the game.

The Raiders took a 35-28 lead with one second left in the game before sending the Falcons to a 4-5 record.

Head coach Frank Mazzotta said, “It comes down to discipline and penalties. When a coach gets a penalty and then a player gets one right after that. We have some people that have more yards in penalties than our running back does running the ball. It’s just stupid.”

Prior to Moorpark’s last drive, the team got a little help at the hands of Cerritos. Surprisingly enough, defensive coordinator Tom Caines was flagged for an unsportsmanlike conduct penalty with under two minutes left in the game.

One play later, linebacker Alex Bush was penalized for a late hit out of bounds and that gave Moorpark the ball at the Cerritos 30 yard-line.

Bush didn’t give excuses about the big mistake.

“[Caines] is the man in charge, as a defense we stand behind him 100 percent. My hit away from the play was a selfish act and there [is] no excuse. It’s hard to stop a team when you give it free yards,” he said.

Bush almost saved the game for the Falcons for the second week after he forced a fumble at the 2 yard-line before it was recovered by the Raiders for the score.

The game brought back some not so good memories for Cerritos, after the team fell to Moorpark last season on Halloween Day. That game is a big reason why the Falcons drew Long Beach City in the Southern California Bowl.

Like last year, the Raiders still ran the same offense, which consisted of a heavy dosage of quarterback Kado Brown and running back Isaiah Johnson in the running game.

“[Moorpark] ran the same offense with two really good athletes. It’s not necessarily what they did right, it was more what we didn’t do,” he added.

The Raiders rushed for 256 total yards on the ground. Mazzotta feels another thing may have contributed to the loss.

“We’re not tackling well, we try to knock the guy out instead of tackling him. I bet there were 500 missed tackles today. I mean, it’s ridiculous,” he said.

The Falcons were left shell shocked as they had an opportunity to seal the game on the drive prior.

Quarterback Nick Mitchell fumbled the snap away at the Moorpark 16 yard-line with 1:43 left in the game.

Running back Kishawn Holmes said, “From what I remember, I was very supportive because he makes great plays but he also makes bad plays. [Mitchell] was just trying to hurry up and make a play.”

Mazzotta said, “We have to play one more game, we’re only going to be as good as our quarterback. If he’s not good, we’re not good.

“He actually threw the ball a little better today. He gets a touchdown pass out there which was pretty good but it looked like me throwing them.”

Cerritos ends the season at home against Ventura Saturday, Nov. 12.

This was the second time in the last three weeks, Mitchell has turned the ball over with a chance to win the game or tie it up in the fourth quarter.

Holmes was one of the most upset following the loss despite putting up some pretty gaudy numbers.

“I have to be one of the most upset people on the team because I happen to be, besides Elijah Rogers and a couple of the returners who felt that same pain against Moorpark last year.

“It just hit me at home because we worked so hard and we really wanted to get to the playoffs. We can’t blame anybody, it’s called life and it happens,” he said.

Holmes rushed for 185 yards scoring three touchdowns. He also accounted for 194 all-purpose yards, he is now 38 yards away from a 1,000-yard rushing season.

Following the shocking finish, some of the Falcon players took offense to the rather tasteless celebration of the Raider players. Bush thinks it just apart of the game.

“Like I’ve always said, football is a game of emotions. [With it] being such an important game for us, rightfully so emotions got a little flared,” he said.