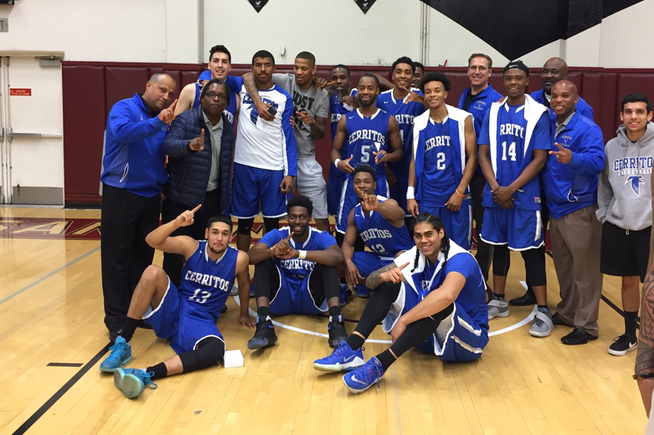 The Cerritos College men's basketball team poses after winning the Mt. San Antonio Tournament. The team has won two of the three tournaments it has played in.

Already for the second time this season the Cerritos College men’s basketball team has won another tournament.

This time the Falcons were able to clinch the Mt. San Antonio Tournament crown following a 79-67 win over the Mounties.

Head coach Russ May said, “Any time that you can win a tournament it is an indicator that you can be successful in the post season.”

“We believe that this team is capable of winning every night if we play right and execute the game plan. We love to compete and it does not matter where it is,” May said.

This tournament win came off the heels of the team dropping its home opener against San Bernardino.

The team’s next chance to defend home court will be Saturday, Dec. 10 against Allan Hancock.

Sophomore guard Brian Nebo said, “This team can be really special. We all are buying into what coach May and the rest of the coaching staff is teaching us and taking advantage of every opportunity at hand.”

Nebo led the way for the Falcons with 27 points in the tournament-clinching win over the host college.

“[Nebo] has become much more mature and stable and he has learned to control his emotions on the court. I also believe that he now knows exactly what his game is and has eliminated many bad decisions. I’m very proud of him at this point,” May said.

Nebo was the scoring leader for the Falcons all tournament long averaging 20.6 points per game. He feels his teammates are the ones who deserve the praise for his high scoring output.

“My teammates put me in the right position to score the ball. I’m blessed to be apart of a lot of talented players, but I feel like I got my groove back and I’m excited about the rest of the season,” he said.

It must’ve been contagious for Cerritos, as the Falcons shot an average of 50.9 percent from the floor during the tournament. The team shot over 50 percent in two of the three games played.

“We have a veteran team that has been in the same system for the last 2 years. Familiarity breads success as well as lots of watching film and applying it to practice. We also have talented players that can make shots,” May said.

Nebo feels the team is just starting to gel at the right time.

*We all are just getting comfortable and we know our roles for this team to be successful. [We are] aiming to get this state championship,” Nebo said.

The Falcons never attempted more than 57 shots in one game. Instead, the team was looking to be more aggressive and get to the free throw line more frequently.

Nebo said, “We have adjusted to how the referees are calling [things] this season and that’s something that is making our defense scaring night in and night out.”

After the first tournament of the year, Nebo was among multiple players who noticed a difference in the tolerance level of the referees.

According to the team, May informed everyone that referees were going to be calling things a lot tighter this season. In other words, more fouls are going to get called this season.

“In our two losses [this season] we have been affected by how the game has been officiated too, so we need to adjust to the officiating and use it to our advantage and not foul too much,” he said.

The Falcons shot a total of 88 free throws in the three-game tournament, making 65 of them; that is a team average of 73.8 percent.

One thing that is remaining constant is sophomore guard Tyler Payne is not playing nearly as well statistically as he did last season.

May feels statistics don’t tell all the story.

He said, “[Payne] may not contribute in the stat sheet every night, but he impacts our program on and off the court every day with his leadership, enthusiasm and work ethic. He sets the tone for our team. The stats will follow.”

Payne averaged 4.6 points per game to go along with 3.3 assists per game during the Mt. SAC tournament.

May insists that the team is not worried about the play of Payne because everyone knows what he has to do in order to be successful, including him.