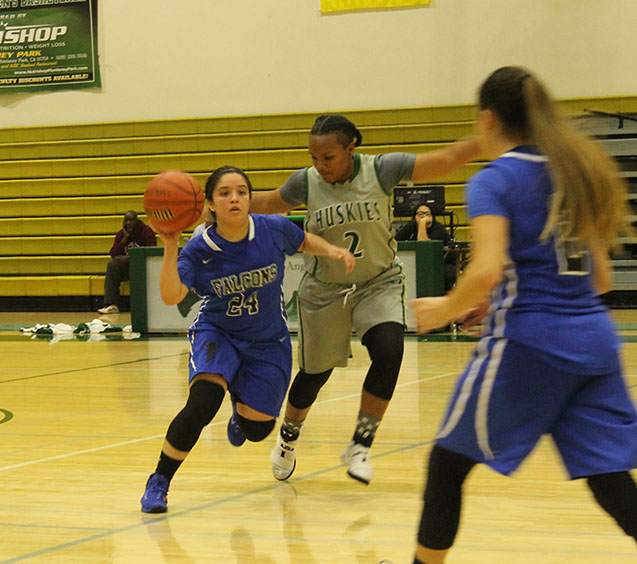 The Cerritos College womens’ basketball team was dealt their second straight loss to the number one ranked East Los Angeles College by a score of 81-47.

The Falcons have dropped to 5-12 on the season and will now prepare to play the second ranked team in Southern California Mt. San Antonio College Friday, Jan. 13.

The game against Mt. SAC will be the third straight game the Falcons will play an opponent ranked in the top five in Southern California.

Coach Trisha Raniewics, welcomes the prospect of playing the top ranked teams in the state.

“I love competing against good teams,” she said, “it’s why you play sports.”

She added, “You go out to play good teams that will get you better.”

The Falcons were able to keep the game close during the first quarter against East LA and were down 15-11 going into the second.

The Falcons would respond with a 14-7 scoring run of their own closing out the half down nine points 37-28.

During the third quarter, East Los Angeles held Cerritos to 10 points while they were able to score 19 to end the quarter up 56-38.

Going into the final quarter East Los Angeles continued to keep defensive pressure on Cerritos, only allowing the Falcons to score nine points.

Freshman guard Angie Ferreira said, “We had a good first half, we were in the game. We came back out and were a little tired and blew it.”

The fate of the game was sealed after a fatigued Falcon team allowed East LA to go on a 25 point run, handing them their 12th loss of the season.

Alexis Clark, first year guard, shared the frustration of her teammate, “We could have played better in the second half, we gave up a little bit.”

Falling apart during the second half of games has been a problem for the team, as of late.

Against Pasadena the Falcons scored a total of 33 points in the first half, only to go on and score 17 in the second half.

In their match against ELAC they scored a total of 28 points in the first half and again only 17 in the second.

“We [just] have to put a whole game together,” Raniewicz concluded.