Falcons take the win in first conference game of the season 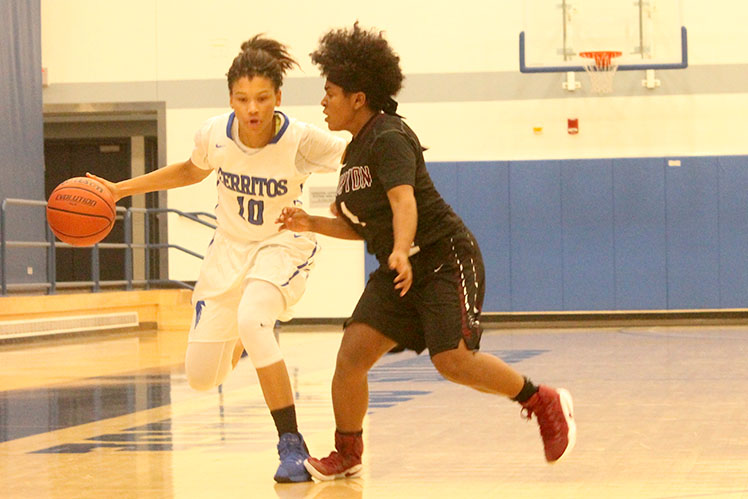 Sophomore guard Kaylyn James blows by EC-Compton defender. James would lead her team with 20 points to a victory against EC-Compton.

Playing the first conference game of the season, the Falcons came out victorious against EC-Compton by a score of 65-36.

The Cerritos College women’s basketball team dominated the game from start to finish, Compton never held the lead, and it was never a tie game.

The Falcons defense forced Compton into committing 27 turnovers and holding them to a 26 percent shooting rate for the entire game.

After a tough stretch of opponents Cerritos was poised to come out and perform its first game of confernece play.

Head coach Trisha Raniewicz said,”We came in focused on Monday and Tuesday of this week to go out, play tough and play forty minutes.”

“We needed to go out and put together a whole game, and I feel like we did that tonight,” she added.

The Falcons opened up the game with intensity and immediately took a 9-0 lead, and ended the first quarter of play up 20-8.

During the second quarter the Falcons maintained their lead and were able to hold Compton to only nine points the entire quarter, leading 36-17 at the half.

The second half was more of the same as Cerritos scored 17 points during the third quarter while holding Compton to only five.

In the final quarter of play Cerritos closed out the game 65-36 to earn the victory putting the team at 1-0, in conference play.

After the victory Raniewicz said,”I’m really proud of the [women because] they earned this win.”

The team shot above forty percent from both the field and from the three point line, shooting is something the team will definitely look to carry over.

Freshman guard Ashley Davis said,”We have to keep working on our shots in practice, just reputation so its muscle memory and we wont even think twice.”

The team plays the next conference game against LA Southwest Friday Jan. 20.

Davis concluded,”We’re ready to win, all conference is going to be nothing but ‘W’s’.”