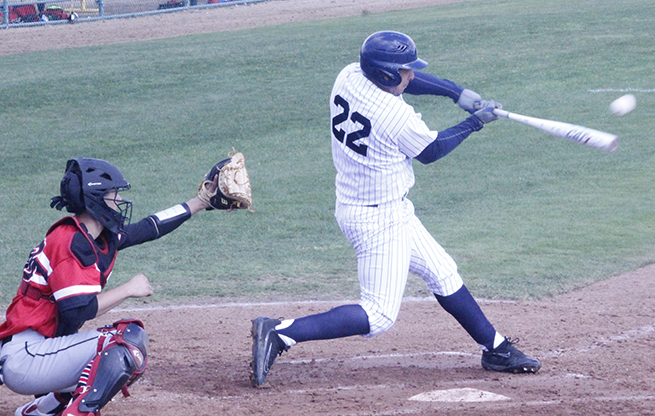 The Cerritos baseball team was able to come away with the second victory of the season against Los Angeles Pierce college.

The Falcons baseball team is in fact a very young team, with only eight active sophomores on a roster of 34 players.

The team lost a lot of athletes from last year and is currently starting seven freshmen, according to Head Coach Ken Gaylord.

Gaylord also stated that all of the Falcons starting pitchers are freshman as well.

Despite having a young team, this isn’t a new experience for Gaylord, last year his team consisted of only 12 sophomore players.

Cerritos started out the game strong with a convincing lead of 2-0, earning those runs in the bottom of the first inning.

The first run was unearned when shortstop Ramon Bramasco scored off a groundout.

The second was a RBI single by Dominic Bravo who drove in Rolando Nichols.

This gave starting pitcher, Vincent Fuentes some room to work with and gave him the ability to challenge the Pierce hitters going into the top of the second inning.

Cerritos kept the lead until the top of the fourth inning when Fuentes allowed a leadoff walk and a run that tied it up 2-2.

The Falcons changed pitchers and brought in sophomore relief pitcher Erick Velasquez, who pitched three consistent innings, only allowing one unearned run on one hit.

Cerritos scored in the fourth inning due to a passed ball and again in the fifth because of a throwing error.

The freshman pitcher Joe Pacheco replaced Velasquez, coming into the game allowing just one run and striking out three batters before yet another freshman, Jakob Johnston, came in and picked-up the save by closing the game out with the final two outs.

The Falcons earned a total of seven runs, three of which they scored with two outs in the bottom of the sixth inning. Outfielder Kevin Sainz hit a single, stole second base, continued on to third after a wild pitch, and ended up scoring on a bobbled throw by Pierce’s second baseman Jorge Navarette.

After the error by Pierce, the Falcon freshman started to light up the score board by adding another two runs in the sixth inning,

Starting with a single from second baseman Christopher Gomez and was batted in by first baseman Jesus Mercado, who hit a two-run double.

The Falcon freshmen didn’t stop there, adding one more run in the bottom of the seventh inning when catcher Adam Rubio doubled, hitting in third baseman Jorge Rodriguez.

“As a team we just need to work on executing on certain plays and on certain pitches,” Rubio said. “Hitters hitting the ball where it’s supposed to be hit in certain situations.”

This is exactly what he did when his double secured the win for the Falcons.

After the game, Coach Gaylord said, “I still think we are playing a little scared, we are a really young team, but I think they need to start believing in themselves, we could be alright.”

With each game, the Falcons are getting closer to adjusting to playing at the college level, to a team that is learning to not only believe more in themselves as individuals, but learning to get to know, trust, and believe in each other.

Rubio said, “Baseball is a game of adjustments and we are making those adjustments, we are just trying to push through day by day, game by game and just pull it all together.”

Rubio ended by saying that the Falcon’s goal this season was to win conference and then do what they can in the playoffs. “Then there is always the championship.”