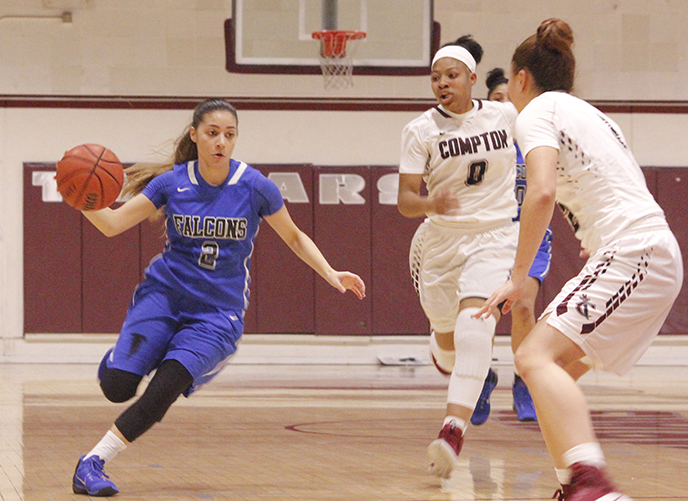 Freshman guard Angie Ferreira attempts to drive past EC-Compton defender. Ferreira would finish with 10 points and three assists in the victory over Compton.

Freshman forwards Alexis Clark and Crystal Rodriguez both captured double doubles in points and rebounds, combining for 38 points and 22 rebounds in the Falcons win over EC-Compton.

Clark finished with 21 points and 12 rebounds which is her second double-double in conference play, while Rodriguez ended with 17 points and 10 rebounds for her third.

Clark said, “It was mainly energy, once I got my energy up I was in the zone.”

Their performance led the Falcons to a 71-58 victory over EC-Compton, and marked the second time the Falcons have beaten them this season.

Head Coach Trisha Raniewicz was pleased with her players performance and how they play the game.

“I think Alexis [Clark] is pretty hard to guard, I think she’s dynamic going to the hoop so I always like to see her attack and she did that tonight.”

She added, “I love when she [Rodriguez] turns and faces, she has a nice shot.”

Throughout the first half the game was highly contested and ended with 35-34 Cerritos lead.

Energy was the main message Raniewicz had for her players during halftime as she stated that EC-Compton had more energy than her team in the first half.

The Falcons outscored Compton 16-10 in the third quarter to give them a seven point lead heading to the fourth quarter.

Cerritos continued its momentum into the fourth to close out the game and capture its third conference victory.

Freshman forward Crystal Rodriguez said, “I think overall we all worked hard and we deserved this one.”

Depite being third in the conference standings the team remains confident in its ability to compete with anybody it come across.

“I feel like everybody has their role,” said Clark. “And if [we] stick to what [we’re] best at, then we’re pretty much invincible.”