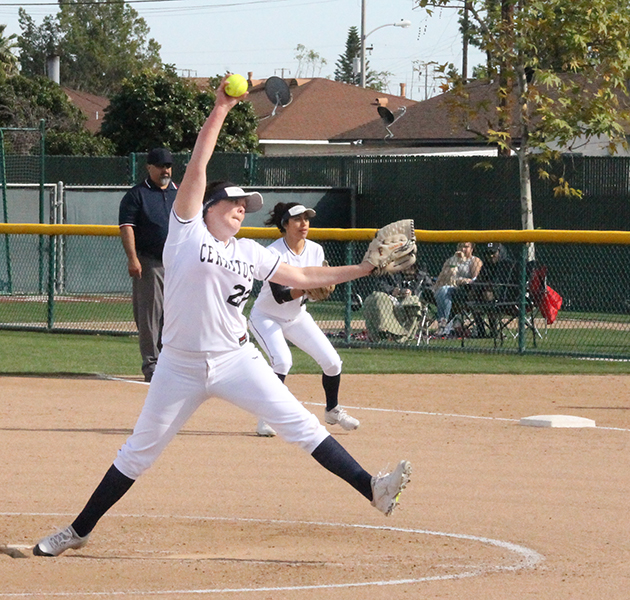 Sohpomore pitcher Kristen Voller goes through her motions about to deliver a pitch against Cypress College. The loss against Cypress marked the second of the season for both the Falcons and Voller.

Facing off against multiple opponents, the Falcons softball team struggled to find consistency in various aspects of their game.

Cerritos battled against Mt. San Antonio College Thursday, in which a Cerritos home run tied the game 5-5 before it had to be postponed due to darkness. The match will be continued Wednesday at 3 p.m.

Against Mt. SAC the energy of the game shifted multiple times with Mt. SAC scoring first, then Cerritos answering back to take the lead.

Mt. SAC would then tie the game 2-2 and then take a 5-2 lead heading into the final inning of play.

A three-run home run in the bottom of the seventh by second baseman Kylee Brown tied the game and forced extra innings.

The game will take place at home and will pick up in the top of the eighth inning.

Going into the continuation of the Mt. SAC game the Falcons will look to enter the matchup with confidence and execute their game plan.

Head Coach Kodee Murray said, “It’s not about jumping in, it’s a zero to zero ball game it’s just starting over, the fact of the matter is either we’re ready to go or we’re not.”

Freshman outfielder Andrea Villalta added, “I think wherever the momentum went, we [Falcons] stayed with [the Mounties] the entire game, I think they thought they had us beat but we came back and stayed in it.”

The Falcons then hosted a doubleheader against Glendale College and Cypress College.

Starting Pitcher Carly Gutierrez struck out nine batters while only allowing two hits and one walk throughout the entire five innings.

The offense was able to rack up 13 hits for nine runs, eight of which came off RBI’s.

The Falcons had a short break before preparing for their next game against the undefeated Cypress Chargers.

Cypress was able to overcome the pitching of Sophomore Kristen Voller and Gutierrez, scoring a combined eight runs off both pitchers to win the game 8-2.

Villalta said, “I think we came and fought and did what we had to do […] unfortunately it just wasn’t our game to win.

Murray added, “I feel like we did a really good job we just didn’t get the timely hits when we needed them.”

The Falcons offense was only able to muster four total hits and two runs during the game.

After a three day break, the Falcons traveled to take on Pasadena City College for the second time this season.

The outcome would not be the same, as Pasadena was able to defeat the Falcons 3-2 .

The loss was the second in a row and dropped the Falcons to 8-3.

Cerritos and Mt. San Antonio continued their game from last Thursday picking up in the top of the eight inning.

The game would end in the twelfth inning when Mt. SAC scored five runs in the top of the inning and Cerritos was unable to answer, resulting in a 10-5 loss for the Falcons.

The Falcons now have an 8-4 overall record.