Brown powers the Falcons past Compton 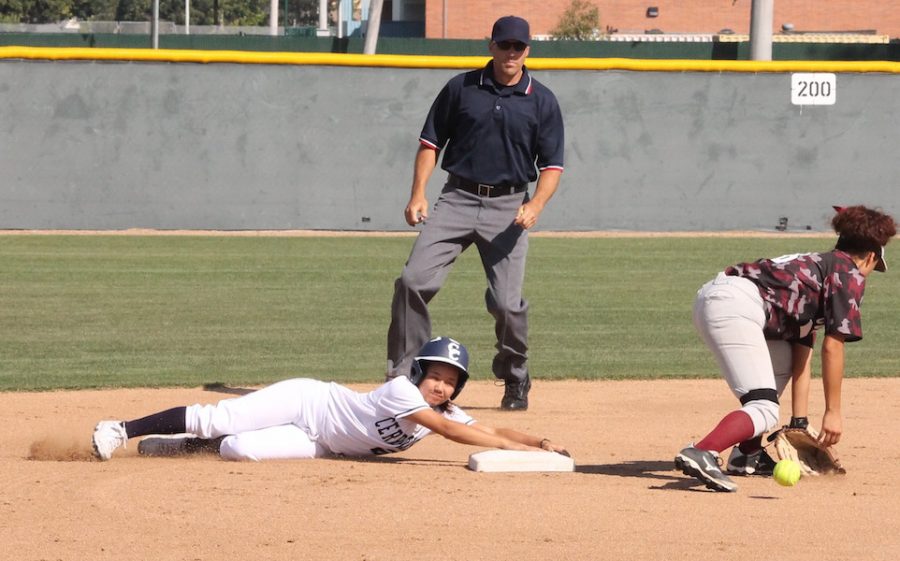 Second baseman Emma Wolff holding the base after she successfully stole second base in the bottom of the third inning in the Falcons Thursday, March 16 game versus EC-Compton. Wolff would finish with two hits and one run in the victory. Photo credit: Max Perez

A grand-slam by first basemen Kylee Brown in the bottom of the sixth inning ended the game early as the Falcons defeated EC-Compton 8-0 for their third straight win.

Head coach Kodee Murray said, “I think that might be a record, that might the first time we’ve had that, I’m trying to think back in the history of me being here and I don’t remember that happening.”

She also leads her team in batting average for players with more than five at bats at .391, home runs with seven and RBIs with 32.

“She’s a leader, she steps up in big situation, she’s everything that your sophomores are that have played in the program and understand what we’re about,” Murray said.

Starting pitcher Jissel Caballero added, “She’s one of our leaders and she’s always been a motivator.”

In the matchup with EC-Compton the Falcons jumped out to an early lead scoring first in the bottom of the second inning with a solo home run by starting catcher Briana Lopez, her second of the year.

The Falcons would later score three runs in the bottom of the sixth due to a RBI double by Caballero, and a two run home run by Brown.

Then in the bottom of the sixth inning with two outs and the bases loaded, Brown hit her second home run of the game pushing the score to 8-0 and enforcing the mercy rule.

The Falcons held the Tartar’s scoreless throughout the game behind Caballero, who threw all six innings and allowed two hits, no walks, no runs and struck out seven to claim her fifth win of the season.

Murray said, “I think Jissel [Caballero] has been throwing really well, and thats a positive.”

This years team only features three pitchers, but all have winning records and combined have an ERA of 2.61.

Caballero said, “As far as our pitching staff I think were stocked, our mound is secure.”

The win puts the Falcons at 14-7 on the season and 2-1 in conference play.

Cerritos is in a two way tie for second on the conference with rivals Long Beach City College, first is undefeated El Camino, EC-Compton is 1-2 and Los Angeles Harbor is winless at 0-4.

The Falcons next game is a non-conference away game against Orange Coast College Saturday, March 18, next week the Falcons will get a chance to play El Camino Tuesday, March 21.