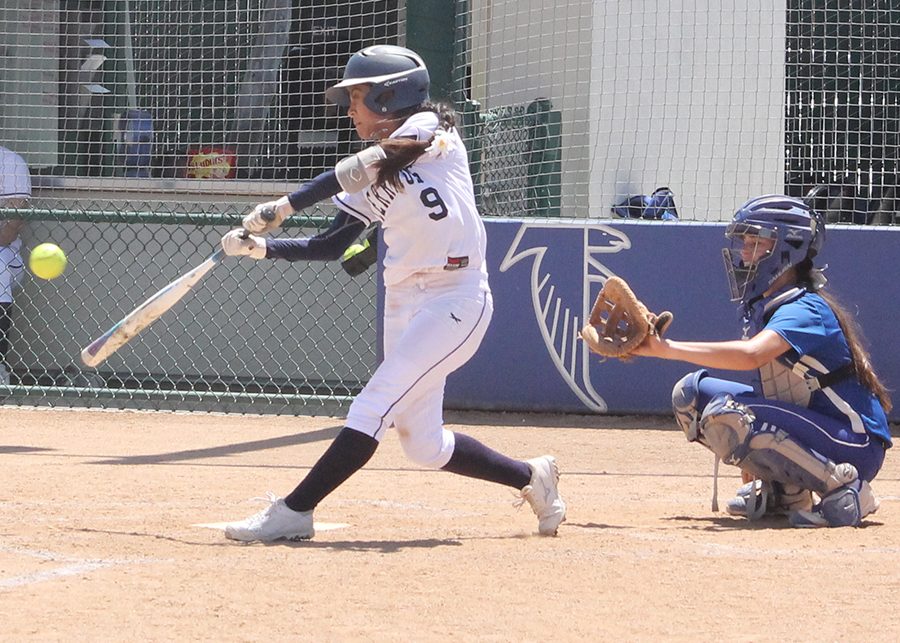 Starting outfielder Kimberly Olivas send a ball to center field during the fifth inning of the Falcons game with Santiago Canyon Saturday, April 22. Olivas is leading the team with 17 steals on the season. Photo credit: Max Perez

Voller pitched all seven innings, allowing no walks, nine hits and four earned runs, the performance was enough to earn her 13th win of the season as well as the Falcons 26 of the year.

Assistant coach Jenel Guadagno said, “She’s a competitor, she knew she had to get the job done for her team.”

Voller said, “I think we played as a team, when that happens you can beat anyone.”

In the bottom of the first the Falcons scored two runs, the first because of a wild pitch committed by Santiago Canyon’s starting pitcher, and the second because of an RBI single from Voller.

The Hawk’s would come back in the top of the second to tie the game at two with two RBI singles.

The Falcons would be able to hold the Hawks scoreless for three straight innings until the top of the sixth, when Santiago Canyon hit back-to-back home runs to bring the them within one run.

In the top of the seventh, the Hawks last chance, Voller retired the three batters in order to close out the game.

Guadagno said, “She wanted to answer back and she did.”

Voller added, “I told [the team] ‘They’re starting to hit the ball hard so you’re going to have to make some plays,’ I just tried to keep the ball down and in the end it worked out.”

The next and final game for the Falcons’ regular season will be against El Camino.

Voller said, “We’re all super proud of what we’ve done so far, we’re going to put our 100 percent against El Camino, and if that’s enough to beat them then that’s what will happen.”

El Camino is 10-0 in conference play this season, three games ahead of second place Cerritos.

In the previous meeting between the teams, El Camino defeated the Falcons 8-2.

The final game will be played Tuesday, April 25 at Cerritos. Before the game starts a continuation to the matchup held on Tuesday, March 21 will be finished.

The game ended in the top of the 3rd inning and El Camino has a 7-0 lead.