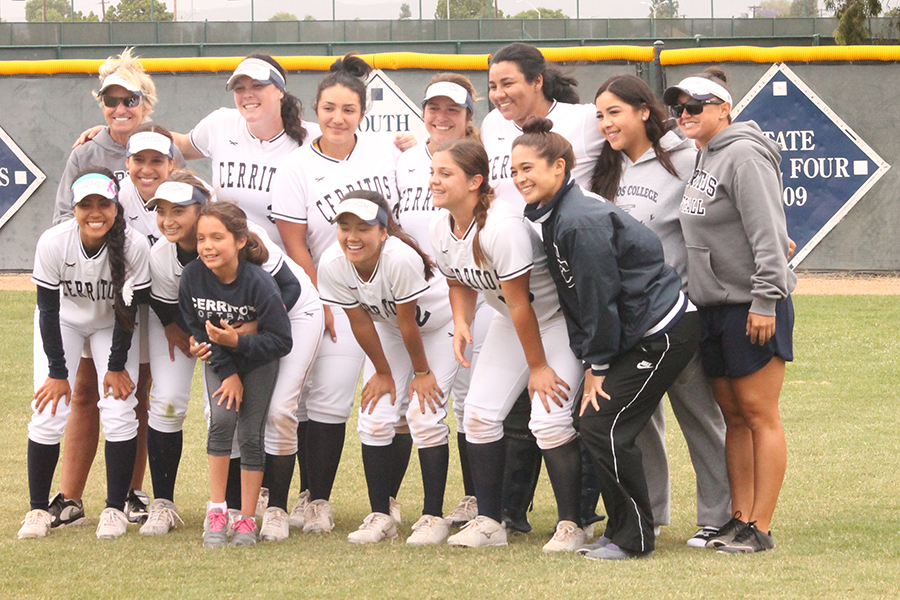 Coach Kodee Murray celebrates with her team and coaches after the Saturday, May 6 victory over Citrus College giving Murray win number 500. Murray is responcible for not only 500 wins but delivering a state championship in 2008. Photo credit: Max Perez

Head coach Kodee Murray and her team celebrated in the outfield after the Cerritos softball team’s 9-1 victory over Citrus College Saturday.

However, the team was not celebrating its advancement in the playoff’s, rather it celebrating the fact that with that victory Murray reached her 500th win as a head coach, all with Cerritos.

Murray’s coaching tenure with Cerritos began in 2002 when she took over the program to become the fourth softball head coach in Cerritos’ history.

Currently in her 16th season, she has made 13 playoff appearances, won six conference championships and one state championship in 2008; one of two in school history.

At the end of the 2017 regular season Murray was at 498 and needed to win two of the three games against Citrus College not only to move on to the Super Regional Playoff, but also to reach the illustrious 500th win.

The team did just that beating the Owls Friday, 14-4, and Saturday, 9-1, to help coach reach the milestone.

Murray said, “The greatest thing in the world is to reach 500 with a team that you have the upmost respect for.”

The respect between Murray and her players is mutual as starting pitcher Kristen Voller said Murray is the best coach she has ever had.

Voller said, “She puts in countless hours in and will do anything for us, she’s amazing.”

Murray concluded, “I couldn’t have reached 500 with a better group and a more determined team than this one.”