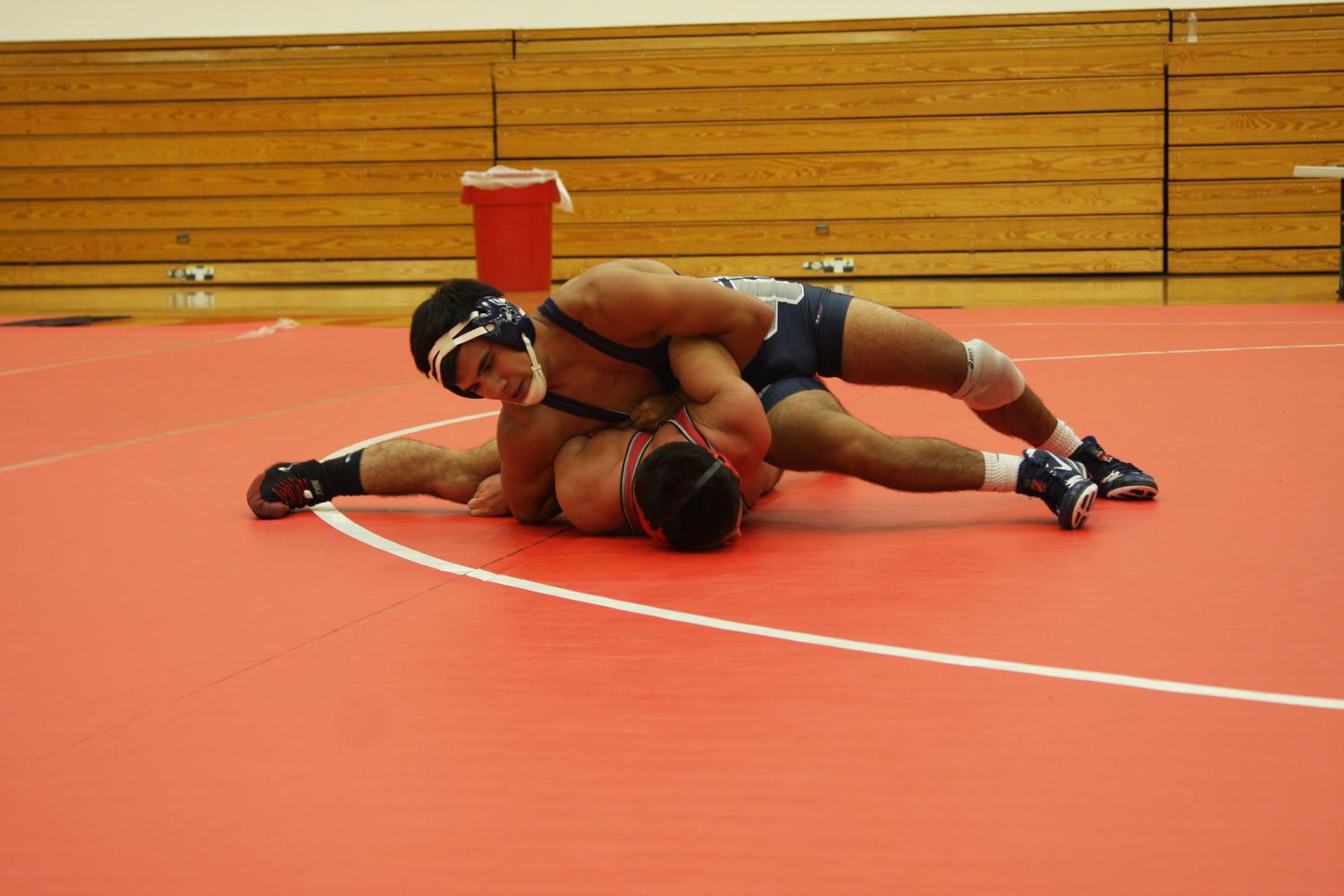 The 175-pound sophomore Blake Vasquez out-wrestling his opponent from Bakersfield. Vasquez won this match due to a forfeit. Photo credit: David Jenkins

The Falcon’s wrestling team come out with victories in the very first competition of the season on Saturday, with a score of 3-0.

Walking into the Bakersfield’s dual, the team faced off three schools:

The Falcon’s first opponent was Bakersfield, which got the team a strong start. They finished off Bakersfield with a score of 33-20. Two wins came out of a forfeit and a pin.

The team then went up against West Hills, defeating them with a score of 28-15.

The 141-pound freshman, Nicholas Camacho, debuted his college event and beat his opponent with a score of 17-8.

“I was really nervous and really excited at the same time because it was a whole new level and I didn’t know what to expect,” Camacho said.

Camacho graduated from Paramount High School and had a wrestling background there. This is his first college competition, where he came out on top and was able to dominate in his matches.

“Being in college the level is completely different. I knew whoever I was going to face wasn’t going to be someone I can just rag-doll around. Everyone is going to be tough.

“The guys are much stronger. Usually in high school you had variations of weak and strong guys buy here everyone is stronger.” Camacho said.

The returning 157-pound sophomore, Wyatt Gerl, won all of his matches at the dual. During his bout against one of the wrestlers from West Hills, he defeated his opponent with an 8-1 win.

Gerl was confident walking into the Bakersfield’s dual, saying, “These guys [his opponents] aren’t the people that are at the top four or five in the state so I was expecting to run through them very easy. The West Hill guy kind of gave me a little trouble, but I was never in danger of losing the match. I did what I expected to do,” he said.

Wrestling Head Coach Donny Garriott sees these first events as stepping stones to work on and look forward to the state championships.

Garriott said “We went 3-0 so I can’t say that it was bad. Like I say all the time, these early events are just for us to get matches so we can see what we have. Seeing them in practice and seeing them in real competition are two different things. We all took notes on things that we were doing well as a group and things that individuals were doing.”

The Falcons’ wrestling team is known for going to the state championships every year.

Garriott and his men are looking forward to it, as they do every year, however, that won’t be until December. Until then, they have many duels and tournaments ahead of them, both as a team and as individuals.