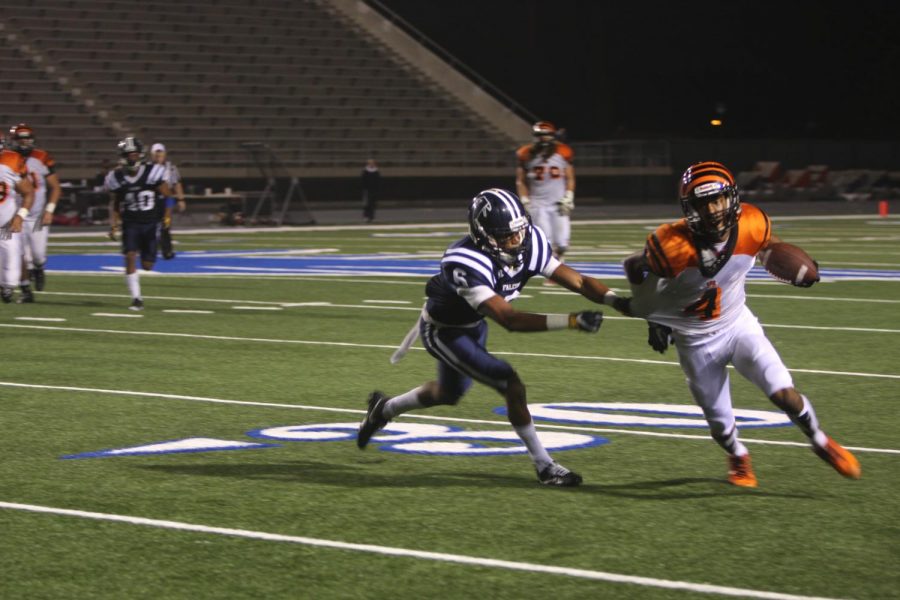 The Falcons consistently struggled to get ahead, they were, however, able to get on the scoreboard in the second quarter making two touchdowns.

They failed their two-point conversion after their first touchdown, but successfully made their field-goal attempt after the second touchdown.

The tension against the rivals caused an outburst by Falcon’s Head Coach Frank Mazzota when No. 4 middle linebacker Cameron Carr would not remove himself off the field after a verbal altercation with one of Tigers’ coaches.

He then had to remove Carr off the field, causing the initial outburst that inevitably involved the entire team.

Carr said the fight was caused by tension, saying, “that’s kind of like our rivalry there.”

He also feels like the team made mistakes and they need to “pick up” and learn from them.

No. 28 running back Querale Hall also felt like the team made mistakes.

“We played good- we just fell short on a couple possessions. It is a good learning game for us,” he said.

Hall made the team’s second touchdown, rushing 10 yards into the end zone in the second quarter with 51 seconds left before halftime, making the score 24-13.

Hall thanks his offensive linemen because they “did a lot.”

“They blocked for me, they picked up, they let me get to where I had to get, so they definitely worked hard this week and it paid off by me scoring a lot of yards so I have to thank them first,” he said.

Mazzota said he spoke with Riverside’s head coach and the coach said, “He actually told me he’s got a bunch of jackasses on his team.”

He notes that a possible reason to the fighting is caused by some of the Riverside team having out-of-state players, whereas, Cerritos College has mostly local players.

The Falcons will have their bye week, and will play again at Santa Monica at 1 p.m. on Sat, Oct. 14.