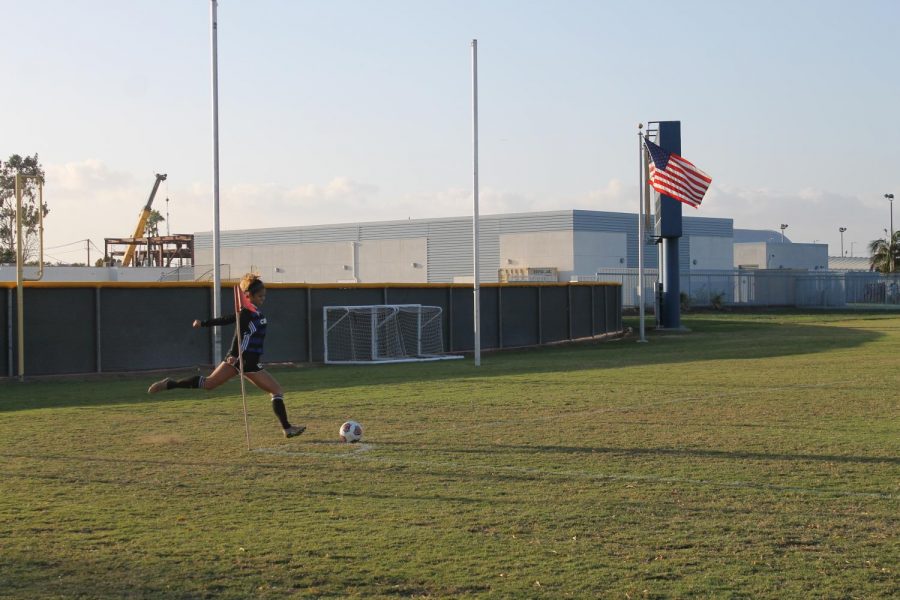 Cerritos College Corner shot by player No. 15 Jennifer Lopez in hopes of scoring. This win improved the Falcons record to 7-1-1 overall and 2-0-0 in the division. Photo credit: Scarled Murillo

The Cerritos College women’s soccer team won with a score of 9-0 over Compton on Tuesday Oct. 3.

This win improved the Falcons record to 7-1-1 overall and 2-0-0 in the division.

Due to the Falcons overall speed and agility over Compton, the team scored three goals in the first 15 minutes of the game.

Player No.7 Mayela Medina scored twice and player No.9 Itzel Ballesteros assisted Medina with those two goals and then followed by scoring her own goal.

By the end of the first half, Ballesteros scored three goals and performed four assists to give her a 10-point game.

With 9:47 left on the clock for the first half player No.3 Mia Ramirez was injured by chasing the ball with opponent Jasmin Hill No.18 from Compton.

Ramirez had to be pulled off the field due to an injury. Since Ramirez was injured Cerritos put in a substitute to finish the rest of the first half.

Substitute No.19 Alixzandra Evans scored twice in less than two minutes, giving her five goals on the year.

Evans had a speed advantage over the Compton Players.

During the second half of the game player No. 25 Tiffany Vargas scored her first goal of the season with a post goal.

After that, Player No. 21 Brittany Reyes scored with a penalty shot giving her five goals so far this season.

Due to the Falcons intense defense, the goalies had an easy game overall.

Ruben Gonzalez, head coach for the Cerritos College Women’s soccer team believes that his girls could have done a better job overall, “It’s not about the score but how the game was played.”

He believes that the girls were being lazy at times and missed too many easy goals.

He also felt that Compton wasn’t a good competition for the Cerritos College players, saying it was too easy.

The Falcons have six more conference games for the season and five more home games of the season.