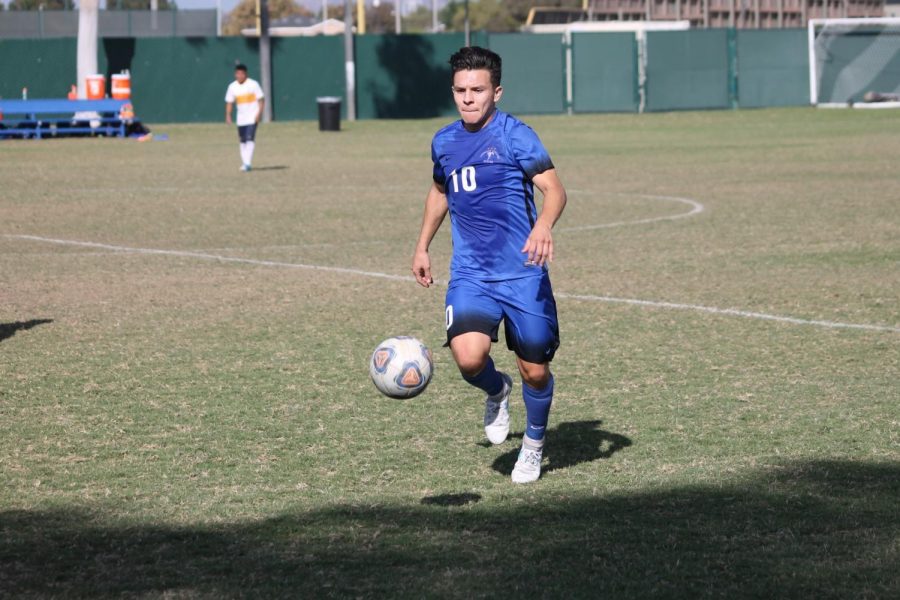 No. 10 Midfielder Luis Garcia works up a sweat in a blowout game against LA Harbor. Photo credit: Jah-Tosh Baruti

Falcons’ futbol beats LA Harbor 6-0, securing 5 goals in the first half alone, inching themselves closer to an undefeated season.

A feat which they have never captured before.

Coach Benny Artiaga spoke of that possibility saying, “The guys have proven that they are really passionate about keeping an undefeated season and being ranked number one, so you know at this point now we have no choice but to jump aboard.”

The team jumped on to an early lead and maintained it thoroughout the 90-minute game.

Sophomore, No. 9 Forward Marc Calderon, echoed that notion saying the team “took control from the the very first minute.

“As a team we started off strong, scoring our first goal in the first five minutes of the game which gave us momentum all throughout the game.”

Calderon stated, “We all chipped in and everyone did their part.”

Sophomore, No. 10 Midfielder Luis Garcia gave insight to the locker room talk of an undefeated season, sharing, “to get recognized here at Cerritos is an honor. Great school and program. And for us to say hey our team made it undefeated [would feel] good.”

The Falcons’ own the top ranked defense, so obviously that is a focal point for the team every single game.

Garcia, said, “on the defensive side we are solid.”

Defense seems to be a focal point with this team.

Coach Benny mentioned defense as being that one thing that he is still preaching in the locker room even though his team has a top ranked defense.

He explained “reaching the top is the easy part, it’s staying there [that’s where the real challenge lies].

“We preach that if we can keep a zero on the score board then nobody can beat us.”

His players have that defense first mentality, just like their head coach.

Garcia proclaimed, not getting scored on is the main point, “if we don’t get scored on, we don’t lose.”

With a shutout out against LA Harbor, the team notched its 8th shutout this season in which they scored at least one goal.

“We absolutely dominated the game,” the coach said.

He also stated, “the shut outs are just a plus to keep moving forward and hopefully we get that undefeated streak.”

Benny, head coach, choked up when talking about how “proud” he is of his team. The team has a lot of Sophomores, so he wants to see them accomplish their goals.

They have a prime opportunity to clinch conference with just a tie in the last regular season away game.

As for the final regular season home game, if they win, they will finish the season undefeated for the first time in school history.