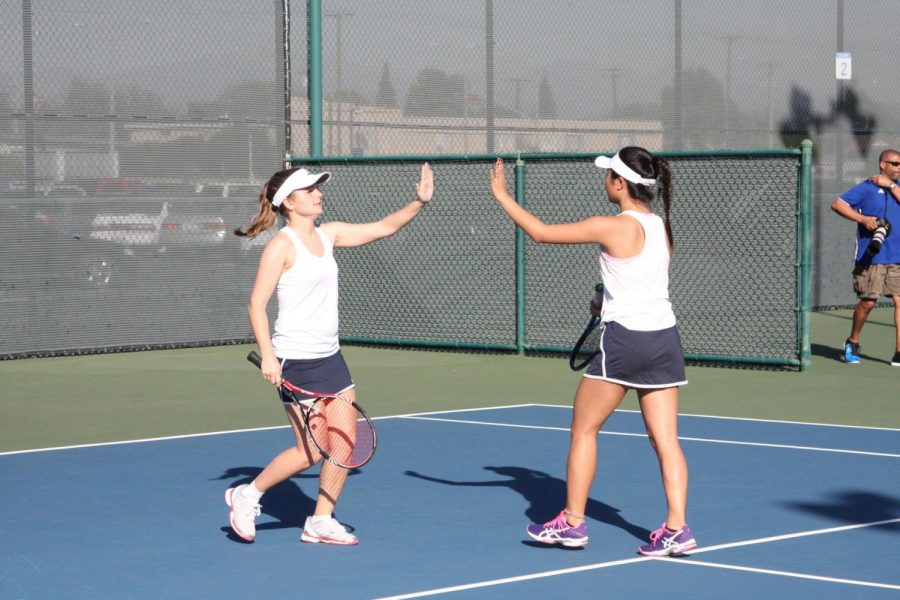 Lisa Suzuki and Petra such celebrate winning the doubles match. Suzuki and Such played against Hope International University's Jessica Cornea and Jovana Milosevic.

The home game consisted of two doubles matches and four singles that were played on Jan. 23.

The two doubles matches were played by Petra Such of Hungary and Lisa Suzuki of Japan.

The other doubles team consisted of Moa Lindstrom of Sweden and Itzi Torres of Mexico.

According to, head tennis coach Quinn Caldaron, even though he is new and the team is made up of many international students, communication is not a problem for the team.

He said, “No, the team was great and they all have a great relationship with each other and I am getting to know everybody.”

Suzuki spoke of the doubles match saying, “This was my first game to play at Cerritos this semester so I was a little nervous at the beginning, but the doubles were pretty fun to play with Petra [Such].

Such and Suzuki’s doubles match was played against HIU’s Jovana Milosevic and Jessica Cornea. It ended with Cerritos winning with a score of 8-2

Such said, “I think, compared to the other team, we were a bit more prepared. We were practicing doubles and singles during the off seasons and practices so we were prepared with our tactics.”

Suzuki commented, “The opponent we played against [Milosevic] used to play for Cerritos College so I knew her and it was very fun to play against her.”

Such played against Cornea in the singles match winning with a score of 6-1 for both sets.

Lindstrom also won both sets against Ancheta with a 6-0 score for both sets.

For her singles match, Torres won with a score of 6-1 for the first set and 6-2 in the second against Hyacinth.

Suzuki won both sets against Milosevic and ended with a score of 6-0 for the first and 6-3 for the final set.

Suzuki said, “The singles, for me, were a little bit easy, so throughout the match I was thinking ‘Make sure to have a close game’.”

However, Caldaron and the athletes agreed that there is always room for improvement.

Such said, that because the whole team could not play this time, it is hard to see what they need to work on to improve.

Such continued to say, “That was really not too lucky that we only played against four girls from the opponent team so we could not really see the whole team together because it was just a scrimmage this time. [sic]

She mentioned that it was fine not being able to play their entire team, but added that, “hopefully next time all of us will get to play, the six of us and then we will see.”

Suzuki said, “I have been working on my service because last season my service was not very good so I began practicing during winter break.

“During the match I was getting better, but I was still doing a lot of double faults,” Suzuki stated.

Such also said, “I would like to be even more focused while playing on both my singles and doubles.”

Caldaron said, “It was a very exciting first match—there were some close ones in there and—some ups and downs. I thought it was a great opener.”

Caldaron stated, “Our strengths are definitely our singles. However, I think we could work on our fitness a little bit more, so we will get going on that. It is the beginning of the year so this is pretty common stuff.”

Such concluded by saying, “This was a good way to start the season.”

In addition, Suzuki said, “I am really looking forward to playing our next game.”

Reflecting on the match, Caldaron said, “I think our doubles could use some work. We have a lot of single players on the team so we are probably going to have to work on our doubles pretty hard—next week or two and keep fighting to move forward.”