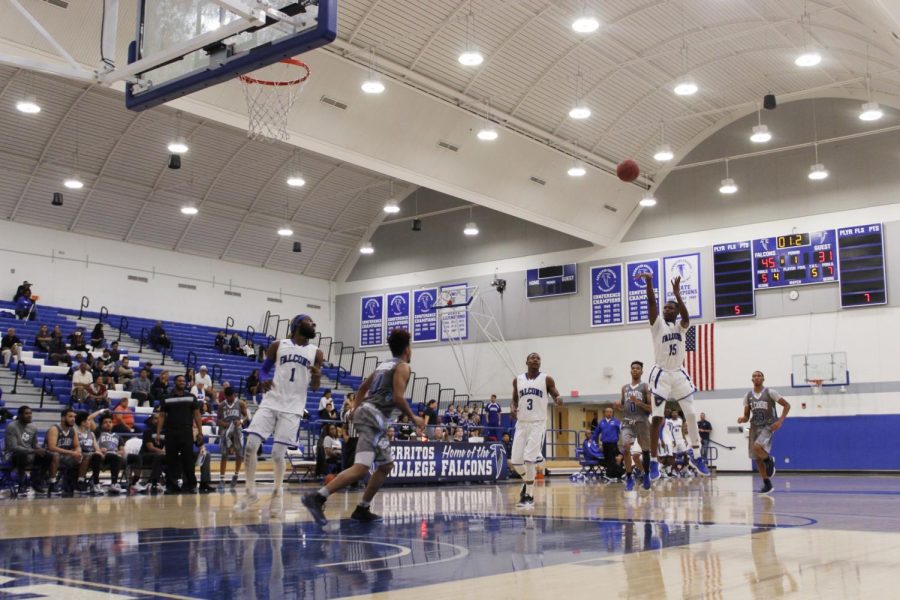 The Falcons’ men’s basketball team blew out the El Camino College Warriors with a score of 104-79, extending their win streak to seven.

The Falcons began the game with a made jump shot by guard No. 4 Riley Hamilton, breaking the ice right away with two points.

Hamilton finished the game with 15 points, 6 rebounds and 3 assists.

Associate head coach Tito Ortiz spoke on how he motivates players during the game, “I always tell them that they have a big target on their back, our record is 21-4 now, teams are going to play their best, no matter what,” said Ortiz.

He continued , “Sharing the ball, making the extra pass, and look for others, the more passes we make, the more shots we can get,” said Ortiz.

Guard No. 14 Keshaun Mack suffered an ankle sprain in the Falcons’ previous game versus Long Beach City College in a close conference matchup, during the second half of that game.

The injury rendered Mack unable to play against El Camino College, a team he previously scored 26 points against on Jan 17.

Ortiz commented on adapting from not having Mack in the starting rotation due to the injury, “The thing we tell our guys is they now have the opportunity to step up, one guy goes down and it’s an opportunity for another guy to step up.”

No. 12 Christian Alvis accumulated five steals throughout the game, which helped the team widen the lead.

He spoke on racking up those steals, “Right place at the right time, I was watching the point guard–he gave it away and I was able to steal the ball,” said Alvis.

Alvis shared his personal thoughts on the team performance, “As a team we did well. We controlled the pace of the game and did pretty well defensively.”

Alvis finished the game with 11 points, 5 steals, and 3 assists.

The team was able use their defense to steal the ball many times, which lead to numerous turnovers for El Camino.

Guard No. 15 Isaiah Tyler believes the team had certain areas that needed a lot of attention, “We really had to focus on not giving up the baseline, we shutdown the corner and it put us in a good spot.”

Tyler says that the team was able to gain momentum during the match by, “Toning in on our defensive efforts–by the second quarter we decided we really needed to lock in and defend the basket.”

In the last couple seconds of the half Tyler was able to steal the ball and make a 3-point jumper, beating the shot clock buzzer.

Center No. 32 Austin Freeman, spoke on his mentality going into the every game, Freeman said he comes onto the court and brings what he learned in practice with him.

Freeman finished the game with 10 points and two rebounds, in nine minutes of action.

The Falcons had El Camino pressured with a lead of 25 points towards the end of the game, as the Falcons tallied 56 points in the final half.

The Cerritos College men’s basketball team has its next conference matchup against Compton College at home on Feb. 7.