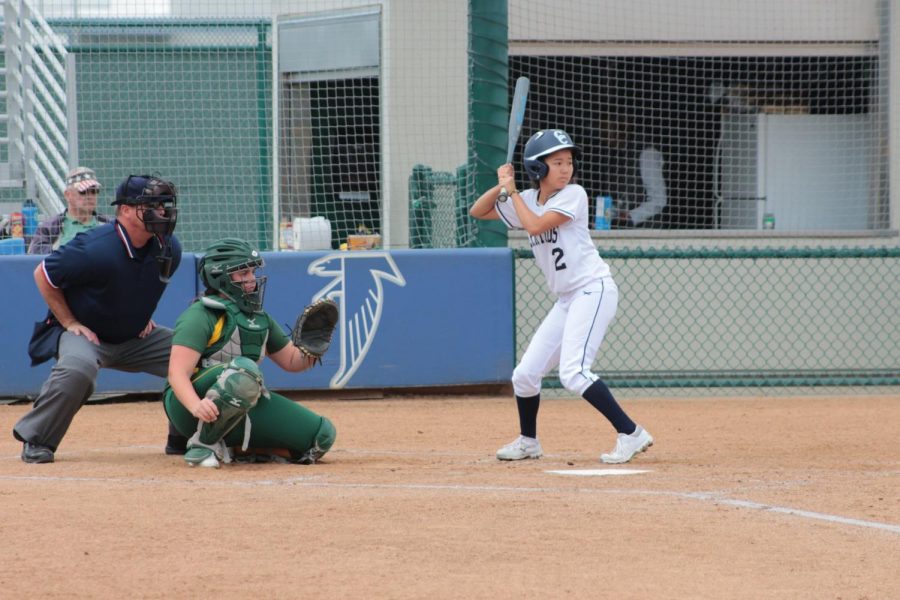 No. 2 Emma Wolff steps up to the plate during a game against Grossmont College. The Falcons won 4-1.

The Cerritos College softball team played their eighth game of the season against the Grossmont College Griffins on Feb. 10 and took the win 4-1

Coach Kodee Murray said before the game, “We look at the stats of the other team, and start to see how we’re gonna pitch em’ [sic] how we’re gonna maneuver our infielders and outfielders.

“If there is anything specific like someone has fever lot of stolen bases we’re gonna let our catcher know about it.”

In the top of the first inning the Falcons made it impossible for the Griffins to get a hit or a run.

In the bottom of the first inning Briana Lopez, sophomore catcher/third baseman walked. Lopez then got caught trying to steal a base which led the Falcons to its first out.

Then–Freshman first baseman No. 17 Keira Bolinas singled up the middle, which allowed Hernandez to advance to second base.

No. 16 Brianna Spoolstra, freshman outfielder, didn’t get so lucky, she hit the ball towards the shortstop which led the Falcons to its third out.

Both teams weren’t able to get any hits or runs in the second inning, leaving the score idle.

Brianna Coronado (Grossmont College) struck out, leading the Griffins to its third out in the top of the third inning.

Starting the bottom of the third inning Emma Wolff, freshman Utility player hit the ball towards second base and Cardenas (Grossmont College) saved the ball causing the Falcons to get its first out.

Wolff said, “My greatest strength was my defensive ability and my weakness would probably be just the bats, just stopping the balls today.”

She added, “I think I can take my pitch to the next game and be more focused on the ball.”

Lopez was up to bat next, she then hit the ball to the center field and made it to first base. Tena Spoolstra, freshman second base/ss for the Falcons reached on a fielder’s choice but Lopez then didn’t make it to second base and left the Falcons with two outs.

Kayla Hernandez then hit the ball towards the center field allowing Spoolstra to advance to second base.

With an RBI by Bolina she singled up the middle, Hernandez then made it to second base and Spoolstra scored a home run for the Falcons.

Brianna Spoolstra walked, then Bolina advanced to second base and Hernandez advanced to third.

No. 14 Kayla Aros, freshman second baseman, fouled out to the opponent left fielder, which lead the Falcons to its third out.

At the bottom of the third inning the Falcons led 1-0.

Hernandez said, “I like being aggressive when I’m up to bat, when I reach a base, I try to do the best I can.”

In the fourth inning both teams were unable to score any runs, with the Falcons leading 1-0 over Grossmont.

With an RBI Brianna Spoolstra singled to center field which lead Tena to score her second home run of the day for the Cerritos. The Falcons led 2-0 over Grossmont in the bottom of the fifth inning.

Griffins were still unable to score at the beginning of the sixth inning.

With an RBI by Tena, Brianna Lopez and Breanna Larez–the team scored a home run. Cerritos led 4-0 in the bottom of the sixth inning.

Hernandez said, her team did “really great, they’re really good fighters. They fight till the end and we always help each other out no matter what happens.”

Murray added, “They did a great job, they came out, they scored, they scored again and stayed in the game in the seventh; the other team was kind of knocking on the door.”

Cerritos had four runs on eight hits and no errors.

This was the Falcon’s first game of a back to back, as they played a following game later in the day against Southwestern.

Murray received a plaque in honor of her winning 503 games. The Cerritos College softball team will play its next game on Feb. 15 at home versus Rio Hondo College at 3 p.m.