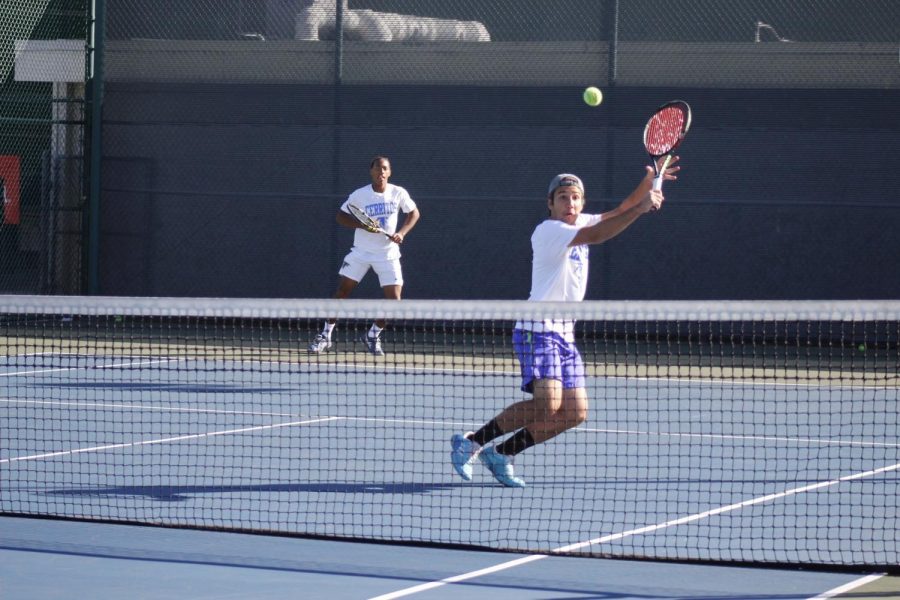 Freshmen Kent Hunter and Victor Castro during their doubles match. The pair won 8-3 and was the only doubles pair to win against Cypress.

The Cerritos College men’s tennis team won its sixth straight game against Cypress College 7-2, the Falcons are now 9-1 on the season, and have not lost a game at home, their standing being 5-0.

The game started with three doubles matches. Cypress was able to overcome Cerritos and won two matches of the three within the game. Cypress was up 2-1 in the score, going into the six singles matches.

The pair of winners for the Falcons were freshmens Kent Hunter and Victor Castro, winning 8-3.

The Falcons were capable of winning all six singles matches against Cypress coming back from being down 2-1 and winning 7-2.

The singles match scores were:

With this being the sixth win for the men’s team now, head coach Quinn Caldaron says, “I think the season’s going as we planned, we’re working hard.

“We still have work to do in doubles, this was the first time since our last loss that we came out in doubles behind. It was really good to come through and win all the singles which was a little bit of a surprise.”

After the team lost two matches in doubles against Cypress, Caldaron says maybe they need to go back to the drawing board with mixing and matching personalities.

“It’s going to be a team discussion, I have my opinion, but I need to hear what they’re feeling too,” said Caldaron.

Overall, the season has started well for the men’s tennis squad and Caldaron says that the team has a pretty good streak, he’s hoping they can go undefeated the rest of the year, although it’s a long ways away.

He continued, “We need to practice hard and need to work on our doubles after today. We kind of have our philosophy.

“I’ve kind of spread that with them on progressing to try and peak at the end of the season, don’t wanna give away too much, but we kind of have our strategy on how we’re gonna go,” said the coach.

The Ukrainian Prokopchuk expanded on his performance saying, “I started well, my opponent made a lot of mistakes in the beginning.

He continued saying that after the first set and primarily in the second set, he made mistakes that gave his opponent the advantage.

“In the third set I tried to keep focused on the game and tried to begin the set without any mistakes,” Prokopchuk said.

He also said he feels the need to be a little more consistent and fit.

Prokopchuk lost his doubles match against Cypress with his partner Carreras.

“Doubles was very tough because of the [mistakes] and I need to keep practicing with my partner,” says Prokopchuk.

Prokopchuk finished the day losing his doubles match, but winning his singles.

Castro coming from Brazil, talked about his win in doubles with his partner Hunter, “That was our best game so far, me and my partner had a great match.

“We played very intense throughout the game, played smart and kept the ball in.–It was too windy today so it makes it harder to play because the ball is never stable.”

Castro won both of his matches, including his singles match.

“I had a great match under the circumstances such as the weather, I kept focus and it was a great performance.”

Castro finished saying he hopes to continue this great season they’ve been playing so far.

Rico, native of Spain, lost his doubles match with his partner Lee, but won his singles match in two sets.

“The doubles match was difficult because there was a lot of wind, but we had a lot of chances to win. We lost those chances, but it’s something to improve on.

“In singles, it was pretty good. I was focused on my match and it was a big win for me,” said Rico.

Coming into the games Rico says they try to play aggressive by going to the net most of the time. Although his tennis is not that kind of game, he is improving on that aspect of going close.

Rico said, “I’m a guy who plays offensive, but sometimes I like to defend. Like my serve, it’s not bad, but it’s not good, also I enjoy the counterattack.”

Rico mentioned that he hopes to improve throughout the season, all that he said needs improvement would be his mentality during games and knowing that if he fights hard, the season will be good to him.

The Falcons’ men’s tennis team has its next match away against El Camino on March 1.

This game will be a double header and a chance for the team to extend the win streak to seven.