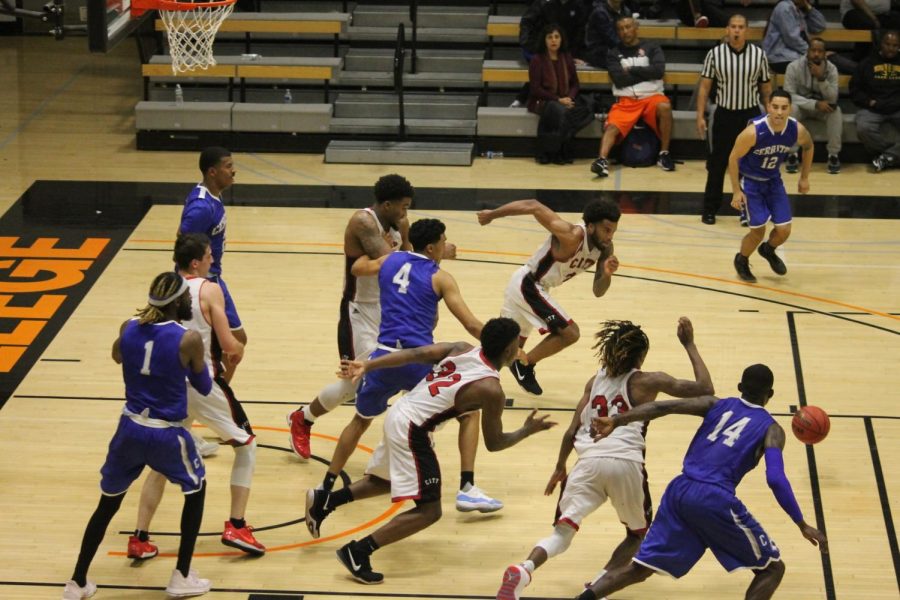 Players on both sides race for a loose ball late in the game. The game was very scrappy and physical throughout.

The Cerritos College men’s basketball team’s season wraps up in the CCCAA State Tournament Final Four, with an 83-89 loss to the No. 1 ranked team in the state, the City College of San Francisco on Saturday.

The game started off on a good note for the Falcons, sophomore guard Keshaun Mack (No.14) was able to get his hands on the ball during the tip-off, he immediately raced down court for a showtime slam over the top of a defender (No. 55 Michael Wright).

Although it would not be the only time he dunked in Wright’s presence, as he performed a dunk contest worthy dunk in-game with a two-handed reverse dunk as Wright chased him down court.

Mack finished the game with 13 points, six rebounds, a steal and a block.

There were a total of 21 lead changes and eights ties in what was a back and forth game for the most part.

The outcome of the game essentially came down to one play: With 47 seconds left in the game and the Falcons facing a deficit of a single point, No. 21 Jonathan Guzman fouled reserve No. 3 Niamey Harris, he missed both his FT attempts, Wright gets the initial offensive rebound and misses the putback, Hayes then gets his hand on the loose ball and scores to make it a three point game–after that the Falcons needed a three to tie it, instead of a two to take the lead, so freshman Christian Alvis, No. 12, a 40 percent three point shooter (which in March he increased that number to 45 percent) hoisted up a triple, that just missed.

Sophomore No. 1 Demetrius Thomas talked about the hectic play which virtually sealed the game for San Francisco, he said, “I was under there trying to get that [ball]. I don’t know what it was, but we could not get our hands on the ball.”

Riley Hamilton, sophomore No. 4, is no stranger to clutch shots in the playoffs, he hit the game winning three-pointer with 1.8 seconds on the clock in the team’s opening playoff game against Riverside and he went 2-2 from three-point land in this game.

When asked why his number wasn’t called, leaving behind an opportunity for him to hit another clutch three, he replied, “It was called, but they did a good job of scouting us and they were denying me a lot…Chris shot a good shot, by having a little open one, so I’m not really mad about it.

“They did a good job of scouting us,” Hamilton said, “so I couldn’t get the ball.”

Freshman guard No. 3 Cody Wilkes was also hot from behind the arch, as he went 4-4 from deep, but was not given a look.

It was only a two point game at the half with Cerritos College trailing.

Although the game was primarily close, the Falcons owned the biggest lead of the game at 13, five more than San Fran’s biggest lead. They achieved that double digit lead by going on a 27-13 run after halftime, which put them up by twelve in the second half with about eight minutes of time elapsed.

The Falcons were in a offensive groove following the halftime talk from the coach. The main thing that slowed down the Falcons’ run of what looked to be another blowout win for the boys in blue were foul calls.

San Francisco College shot a total of 32 freebies to Cerritos College’s 14. With 18 of the 32 being in the second half alone, which accounted for 12 points.

Cerritos shot only eight foul shots in the second half

Mack shot two FT’s in the first half, before getting six shots at the line in the second. He said, “My performance was alright, my jumper once again tonight wasn’t falling, but I was getting to the rim.

“I feel like the refs missed a couple calls when I was going to the rim, they was hanging on me, they (refs) just didn’t call it, but I don’t want to blame everything on the refs,” Mack continued, “but they gotta come through with better calls, gotta call something, on the other end, they was giving them little cheap fouls, little tap fouls—on our end we’re getting slaughtered.”

“I didn’t understand that part, I was frustrated, I was upset,” Thomas said, “because it didn’t make any sense to me, because we’re going to the line and getting smacked like they’re supposedly getting smacked, so I didn’t think the game was fare, officially wise.

Malik Smith, sophomore No. 2, was in charge of guarding the speedy PG Brown on defense, he talked about that and the team’s performance, he said “I thought we did good, kept them contained for the most part, [he] just got to the free throw line way too much, I think he was 11-12 from the free throw line and that was basically all his points.”

Thomas, who gets to the free throw line for an average of four times a game, did not shoot any foul shots in this game.

Mack said, “Yeah that’s the refs man, they wasn’t calling nothing for us…to be honest our fouls wasn’t really foul worthy fouls, it was probably like a little touch, but on the other end, they fouls were putting us on the ground fouls, like pushing us next to the wall fouls, the fouls [the refs] missed out tonight was crazy.”

Turnovers were another problem for Cerritos as the team had 18 TO’s in comparison to San Francisco’s 10.

No. 32 Austin Freeman said, “We just got to get better on our turnovers, silly turnovers threw it off a little bit…so less turnovers would have did it.”

The Falcons had a 13 point lead with eight and a half minutes to go in the second half, head coach Russ May said “Then we made some bad decisions, got sped up a little bit, missed and they made some plays down the end and we didn’t, what comes down to one or two plays in the end and you’ve got to make those plays, I thought they wore us down in the end a little bit.”

Hamilton was tied for a team-high in points with 16 on 7-11 shooting, including 2-2 from distance, to go along with six rebounds.

Hamilton also shared his thoughts on the team game, “I think we did really good, we just didn’t execute towards the end, but throughout the whole game they definitely felt our presence—I’m proud of everybody that performed today, they all stepped up when they needed to step up.”

Freshman Freeman had an increased role with Jason Carter, No. 21 being out, he said, “I feel like I could’ve did more, but I feel like I stepped up and did my part to help out, but I just wish we could’ve came out with the W.”

Freeman also spoke on the team’s performance saying, “We did good we just didn’t pull it through, how we were supposed to, but we did good, we went pretty far.”

Thomas had 16 points on 7-10 shooting (2-4 from three-point range), six rebounds and three blocks.

He said of his performance, “I did pretty good, came out kind of hot, I was aggressive and then I tried to carry my aggressiveness from the first half to the second half, I wish I did…after a while we just went into a little drought.”

Smith talked about not having Carter available to play, he said, “I think that’s why they made that late game run, [because] we got a little wore down from our front court.

“I think if Jason was there it could’ve been a different game.”

Thomas agreed with Smiths statements, he said that he felt Carter could have been “a big help,” especially in securing that crucial late-game offensive board.

“Not having him, a man down that hurt us,” Thomas said, “but we still had the game, but that definitely hurt us.”

May reflected on the season’s end, “It was a special season, obviously it didn’t end the way we wanted it to end, but what a tough-gritty group of guys, from all the things we’ve had deal with—losing coach Freeman, me being gone and losing my brother, Guzman losing a family member…and a couple other people, it’s been real resilient group and I’m just so proud of them, love them all.”

Overall the 2017-18 Falcons men’s basketball team finished with a record of 27-6 (9-1 in conference play), while going undefeated at home (8-0). The team won 3-of-4 playoff games this season on its trip to the Final Four, which was the furthest May has been in his coaching tenure. 27 wins were also a high for May’s career.