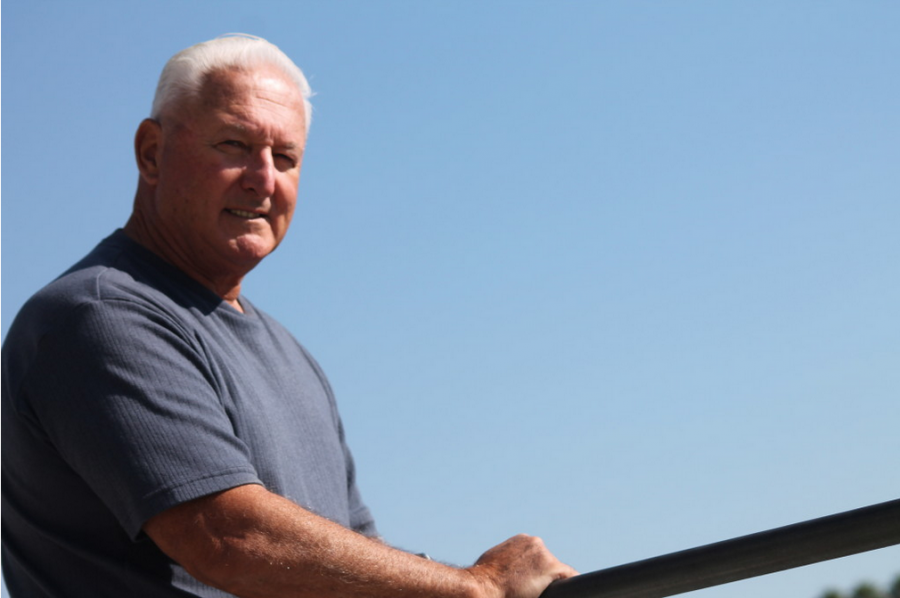 Falcons football will have a glaring difference on the sidelines for the upcoming season, veteran head coach Frank Mazzotta will be retiring before the start of the season.

Mazzotta has been the head man on the gridiron for the Falcons’ football team for the past 40 years.

Coach Mo as he’s commonly referred to announced his retirement via his Facebook page on April 12, much to the surprise of current players.

Coach said he did not want to leave right now, but he’s happy that he’s going out on his own terms, noting that he didn’t get fired or anything like that, it was just time.

Making of a legacy

Mazzotta grew up in Pico Rivera, about 20 minutes from the Falcon field.

In 1976, Mazzotta took a job at Cerritos College as assistant coach under his high school coach, then head coach of Falcons football, Ernie Johnson.

Two years after Mazzotta signed on, Johnson was fired by the program.

Mazzotta talked to Johnson about what he was going to do, then he put his hat into the ring for the head coaching position, Mazzota said he did a good job in the interview and thus in 1978 was named head coach of the Falcons’ football team.

When Mazzotta took the job, he immediately hired Johnson back on his staff, much to the dismay of the football program.

However, they could not argue with the results, as Mazzotta lead the team to a championship in his rookie year as head coach, with Johnson by his side.

Mazzotta talked about what would have happened if he didn’t get the job as head coach, he said, “A year and a half here [as an assistant] and had I not got the head job, I probably would have left, that’s how stupid I was, because the job’s a great job.

He continued, “…at the time, being young, I thought, well, I’d go do something else, coach at another place, because I didn’t want to be an assistant here any longer. Although, it was a great [job].”

He talked about his on the field success during his final season and said, “I don’t know about win percentage, it’s not the greatest, I would have loved to have been better.”

Mazzotta has accumulated a 61 percent winning percentage throughout his time at Cerritos College.

In 2017-18, which would be Mazzotta’s last with Cerritos College, the football team 3-7 record and missed the postseason for the second time in a row, after making the playoffs in the previous three seasons.

He added, “I would have loved to end it on a higher note, like our baseball guy [Ken Gaylord], he’s doing really good, he’s going to end it on a great note.”

During Mazzotta’s 40 year tenure as head man of the Falcons’ football team, he’s helped over 500 of his players receive scholarships to four-year universities.

He said, “My big deal are those kids, because [for] everyone of them it’s important for me to see their success.

“When a kid tells you that I took the place of his father or without my guidance he would have been maybe running the streets, [that’s] the winning thing…”

Mazzotta emphasized to his student-athletes to “get someone to pay for your school.”

He said of Falcons football, “It’s been my life, that’s been the hardest part, telling those kids I wasn’t going to coach anymore.”

Over 40 seasons as a head coach with Cerritos College, Mazzotta compiled a career record of 252-153-6, his amount of career wins puts him in line with the top eight head coaches in junior college history.

A true hall-of-famer, Mazzotta has been inducted into the Shrine Classic Hall of Fame, as well as the 605 All-Star Game Hall of Fame.

Mazzotta coached at the University of Utah for two years, until his dad passed away at 46 years of age, so he came back home to be with his mom.

He mentioned the opportunities he could have had, saying, “I was with a staff which every one of those guys ended up in the NFL.

“In fact when I left, George Sieford, who was the head coach of the [San Francisco] 49ers, took my place on the staff, so you never know where I would have ended up with that.”

Although his life has revolved around football, Mazzotta said he was also a gymnast and coached five years as a gymnastics coach at his alma mater, El Rancho High School.

After his time at El Rancho High School, Mazzotta got a head coaching gig locally at Warren High School in 1973, where he proceeded to coach there for three years, turning a losing program into a championship program.

Following his stint at Warren High School, he said that the coach for Cerritos College at the time, Johnson, was having some trouble and wanted him to help out. Thus Mazzotta ended up at Cerritos College and never looked back.

Mazzotta went to El Rancho High School in Pico Rivera, there he won a California Interscholastic Federation title in 1960, his junior year.

He was also named to an All-League and All-CIF team during his days at El Rancho.

After high school, Mazzotta then attended Long Beach City College, where he was an All-American tight end and won another championship.

Then he went on to attend the University of Utah on a scholarship, where he became a member of the Utes.

Angel Salcido, current Falcons’ offensive linemen and Associated Students of Cerritos College Director of Athletics said, “coach Mazzotta has been one the best coaches that I have ever worked with.

“The amount of respect for him throughout the football team and the community is overwhelming.”

Salcido said, although Mazzotta took his football coaching seriously, he’d never hesitate to joke around and laugh with the guys.

He detailed that throughout his football career, he believes that you can always tell when a coach is going to be done coaching, because they are tired or they have “fizzled out.”

Salcido praised coach for his ability to last so long on the Falcons’ sideline, he said, “I am still amazed about coach Mazzotta’s passion for the sport even through 40 seasons, it seems that it only made him more passionate for the game.”

He continued on Mazzotta’s legacy on and off the field, he said, “It’s really humbling to know that you’re being coached by the same man who has touched the lives of hundreds of players before you.

“I can positively speak on behalf of the rest of the team when I say that he is a great mentor, role model and to some even a father figure. It’s because of him that to the outside world Cerritos [College] is seen as a factory of Division 1 athletes and even NFL players.”

He says Mazzotta is someone he’ll never forget.

“I can see that it really hurts him to retire, but in reality this will always be his team and we will all have a place in our heart for him as he does for us.

Salcido ended with, “It’s amazing to see players from the past come in to visit coach Mo, especially those that played in the NFL.”

Fealofani “Tali” Afemata, graduating center for the Falcons’ football team, said, “Coach really took the time to connect with [me] outside of my progression of my football career.”

Afemata said, he can’t think of a specific memorable moment, but one thing he will remember is that “these refs had no easy days with Coach Mo around, if it was a bad call, he was going to hound them…”

He finished with saying, “I will remember the love and hospitality [that] he has shown to me [since] the first day I stepped into the weight room.”

Afemata is another example of Mazzotta’s impact on players receiving scholarships. He has accepted a scholarship to Southwest Baptist University.

Not only has Mazzotta coached two of his sons here at Cerritos College, but he also stuck around long enough to have them coach alongside him as well.

He also coached his grandson in 2014.

His oldest son, Frank, is the head coach of La Habra High School.

While his other son, Casey, is the head coach at Mt. San Jacinto College.

It is fairly common for people after retirement, to relax and kick back on the beach with a piña colada in hand. However, for Mazzotta, he still plans to coach.

Mazzotta said he’s most likely going to help his two sons coach in some capacity.

He also joked that he’s going to interrupt his wife’s life, because he hasn’t been around that much over the past 40 years.

Cerritos College will honor Mazzotta on May 20 with a dinner, which his former players, family, friends and faculty will have the opportunity to thank him for his commitment and dedication to the Falcons’ football program, as he accepts the golden handshake commonly given to Cerritos College retirees.