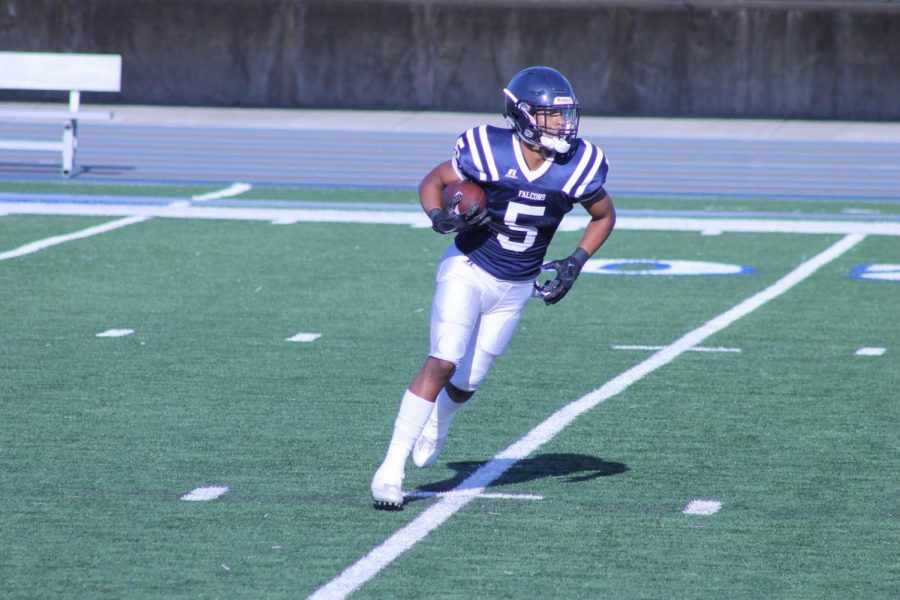 Freshman wide receiver no. 5, C.J. Parks running up the field. Parks is on his first year for the Falcons.

Cerritos College’s football team appeared strong on Aug. 23 as they took on San Jacinto College in a scrimmage match.

The team’s scrimmage consisted of many drills by position amongst themselves, and against the other team.

Once the drills were completed both teams took turns on offense, regardless of the outcome of the previous or current play.

Nearing the end of the scrimmage the teams played two 15-minute quarters, where scores where not kept and some plays were able to be run twice regardless of the down.

During the drill section of the scrimmage, Cerritos looked strong winning most of the drills while falling just short on a few attempts.

The lineman drill in which both team’s linemen take turns from offense to defense trying to get passed one another the goal of the drill is to see how fast and efficient either team can either get passed or hold them to their position.

Quarterbacks and wide receivers worked on drills together against their opponent where the offense would pick a play to run and try to score. Once the team failed then they would switch and this would continue until the drills came to a close.

The kickers practiced returns three to four times each before switching to offense.

Once the team had switched to offense the returning team looked organized and was playing as a unit as they blocked properly and ran plays correctly.

As the drills came to a close Cerritos and San Jacinto had a two quarter scrimmage.

Cerritos came out strong scoring first and while Cerritos does have smart quarterbacks that can throw, it was their run game that sealed their first touch down.

San Jacinto also had a strong offense scoring on a few plays, but it was the Cerritos defense that had limited their scoring effort.

Overall the Cerritos Falcons looked strong throughout the scrimmage on both offense and defense. The team will have a home game against East Los Angeles Sept. 1.