Falcons off to a mixed start 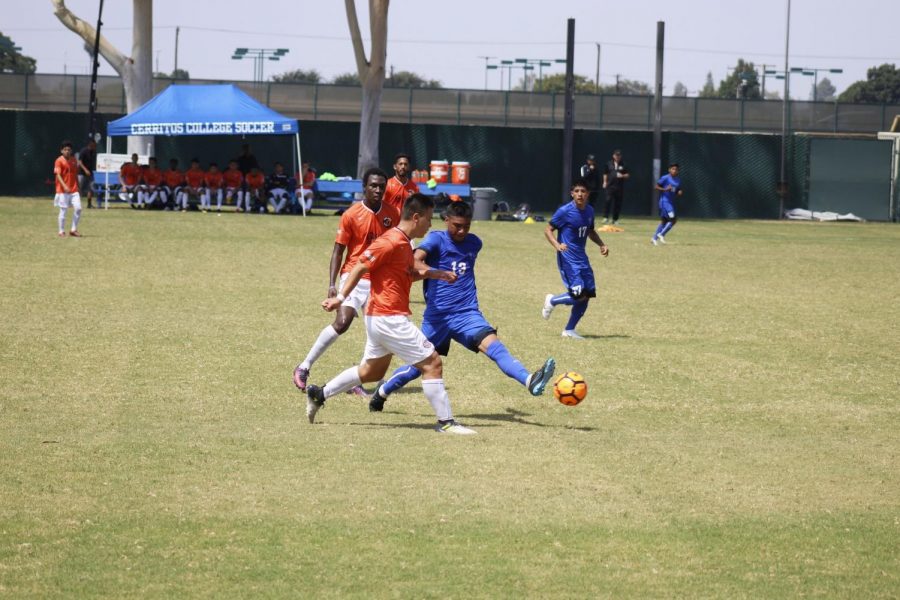 Sophomore forward No. 13, Christian Perez fighting for the ball during the first game of the day against the L.A. Wolves. Perez also played against the 2008 State Champion Alumni during the second half.

Falcons begin the season with back to back games, starting on a tough note due to a second game loss.

The men’s soccer team played its first two exhibition matches of the season this past weekend against L.A. Wolves football club and the 2008 State Champion alumni.

Although both games didn’t keep score, head coach Benny Artiaga was able to see how his team performed on the pitch and if there should be any changes before season.

The players had their first game against the L.A. Wolves, which ended on a positive note.

Artiaga said, “We saw a lot of good things, we saw a team that’s very structured and ready to go.

“We take nothing, but positives out of [today].”

Artiaga didn’t believe the team would be as good as they are, but was surprised to see how much ground the Falcons are able to cover on the field.

Artiaga praised his sophomore goalkeeper no. 1, Jordan Aldama after the match.

“We have the best goalkeeper in the state of California… he wears his emotions on his sleeve, he’s our vocal leader. Once he learns to channel those emotions, he’ll be real special.

“Now with his experience and maturity, I think he’s ready to take our team to the next level.” Artiaga said confidently.

Camacho feels a big responsibility being the captain, but is pushing the team to win and making sure the players give their all.

“We did really good, there’s obviously still some things to clean, but everything we practice, we executed,” Camacho said.

“We’re not at our highest peak, we’ll get there. We’re evolving, getting better day by day,” Perez said.

With the first game past the team, its next objective was to tackle the 2008 state champion alumni, who were returning to Cerritos College for the 10th anniversary since they won.

The players didn’t have the same outcome on their second performance that day.

“Even though it was a scrimmage and it didn’t mean anything, I don’t teach my players to lose at anything.

“I don’t accept losing, I will not accept that from any team that I coach ever,” Artiaga said.

Artiaga believes the team thought it was just a “fun at the park” game.

Watching his alumni play, Artiaga is overjoyed with seeing his old play against his new.

“They are the epitome of what we wanna teach here, 10 years later and they’re still winners in their mind,” Artiaga said.

Overall Artiaga said, “We’re ready, the soccer part wasn’t a concern we did what we had to. It’s the mentality that you can lose or you can not compete at any given moment is the little things that bother me.”

Perez said the attitude of the team changed going into the second game.

“We were tired from the first game, but half of the team didn’t wanna play. I understand why Benny got mad because he’s right… we shouldn’t lose under any circumstance,” Perez said.

Perez believes even before these games the team has been ready and is prepared to bring the strength into the season.

Perez ended with, “Stay tuned, this is gonna be a really good year for us.”

The Cerritos College men’s soccer team has its next game away at Hartnell vs. Fresno City on Aug. 31.