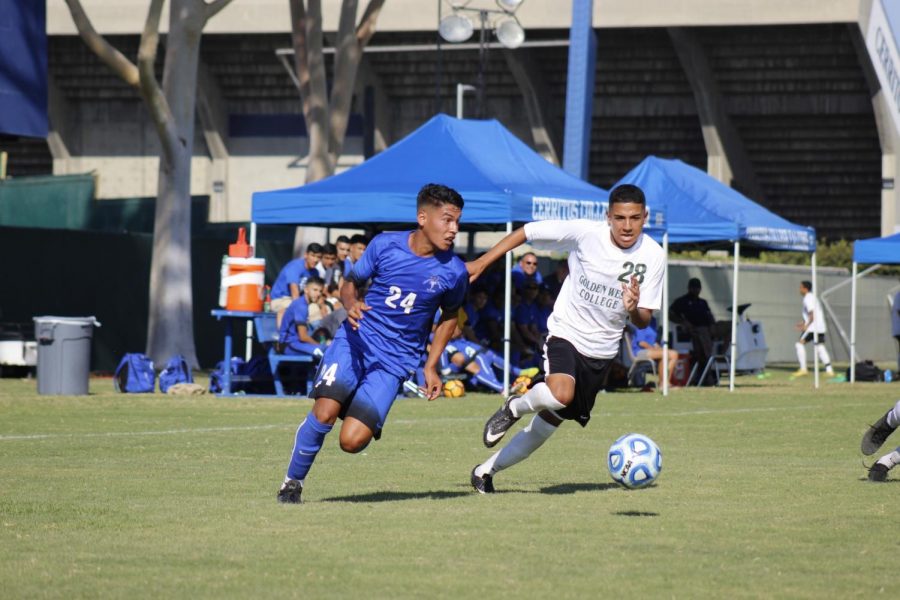 Freshman midfielder, No. 24 Carlos Perez helped control the midfield to keep the opponent scoreless. Perez sped past a defender to create a play for the Falcons at Cerritos College on Sept. 7 against Golden West College.

Cerritos Men’s soccer team obtained its second victory of the season on Sept. 7 and their first one on home soil against a really strong Golden West Rustlers team.

Despite the Falcons getting the win the opposing defense would not let up, but their offensive play failed to add to the scoreboard against Sophomore goalkeeper No. 1, Jordan Aldama.

Cerritos had many more shots than their rivals in the first 45 minutes, however they went scoreless at the half.

Cerritos had a total of 15 shots with 5 on goal in the game’s entirety.

Sophomore forward No. 13, Christian Perez was injured before the 15 minute mark after a challenge from the opposition. Perez had a knee injury before this match and played only 25 minutes total.

Cerritos had two shots on goal in the first half that were prevented by both the goal post and crossbar.

The Falcons scored in the last 20 minutes of the game when freshman forward No. 9, Kevin Diaz received a pass from freshman midfielder No. 17, Bryan Ortega.

This game also was the first one in which the Falcons did not receive any goals from the opposing team.

Head coach Benjamin Artiaga said, “The team can not lose their mind on the field.”

During the game there were 29 fouls from both teams. Only one Cerritos player was given a yellow card: midfielder Ortega.

Artiaga when asked what the team needed to work on for the next match against Oxnard College said, “Our offense needs to learn from their mistakes that could have made the score more than 1-0.”

He continued, “This is a great win and we had discipline on the field; we had four of our starters injured … really impressive game.”

Sophomore midfielder No. 10, Erick Gallinar who had one shot on goal also explained that offense needs to improve and that there are no days off.

Gallinar said of the team’s performance: “The team started slow, but we were patient and we scored late in the second period.”

Ortega said, “At first man marking was terrible. The opposing team was committing so many fouls and the referee was frustrating me.”

In regards to the match in general he stated, “We were calm with ball possession. We need to play more as a team. We need to make our shots on goal count.”

Perez said, “Overall we did good. In the previous games this season we were in a panic and desperate to get the win, however today we were not in panic.

“We did a really good job on the field and we got our goal the three points.”

In regards on the team’s improvement Perez said, “It is not just about improving on the field we [forwards] need to score more goals.”

On Sept. 14 the Cerritos Men’s Soccer team will travel to Oxnard College at 4 p.m. and look forward to a third victory this campaign over the Condors.

The following game after the trip to Oxnard, will be a rematch of the State Semifinal match from last season against Taft College on September 18th at 3 p.m.